The smell of freshly cut grass lined with markers of accomplishment, the roar of thousands of people, nachos and sodas and beer around you, feelings of devotion and pride and victory ... this is football.

I was brought up watching Kansas City and Wisconsin games, teams my father was committed to, but soon I came into my own in the sports world and pledged my allegiance to the New England Patriots. I have been with them through ups and downs, and although I'm no longer in "Patriots territory," there is no way I will change my loyalty.

I have watched - and yelled through - countless games on TV. I watched them lose Super Bowl XXXI but was also lucky enough to witness some of the most amazing football ever: the 2001 AFC championship and Super Bowl XXXVI, which they won beautifully. I know what it means to be offsides, what the difference is between a third and second down, what happens when a coach challenges a call and a lot more. It is rare even now to find a girl as knowledgeable and passionate about football as I am.

When the Pats played in the Super Bowl my dad and I went to a friend's house to watch. All the other women went to Boston to see a musical. This year, I spent an entire weekend with my visiting grandparents, so I chose to stay home on Sunday, rather than go downtown, to watch the first Patriots game of the season. My mom said she didn't understand why I would choose football over shopping and walking around downtown. I don't know if she'll ever understand, but that's okay. No matter how old I get or where life takes me, I will always be a Patriots fan and a lover of football. I will always remember watching the Super Bowl with my dad. Whether they win or lose I just love a good game, but there is no greater feeling then when the clock hits double zeroes and your team has won. 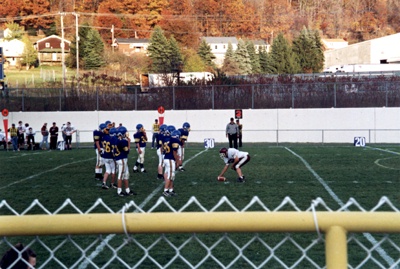