One of Them | Teen Ink

One of Them MAG

We crowded around the wall as the list was posted.Scanning it anxiously, I saw my name among the five elite freshmen who made thesquad. I felt my face glow as I walked away with a huge smile. After threedifficult days of tryouts, my aching muscles carried me away from the grouphuddled around the sign. I had made it - I was a cheerleader.

"Nicehit, stupid cheerleader." The words rang in my ears as I froze, trying notto let the comment faze me. Not only had I made the squad less than a week before(with practice not even starting until summer), but this cold remark was comingfrom one of my friends. I figured people would be happy for me, but I was wrong.Coming from Stacy, this hurt ten times more than if it had come from someoneelse. This was Stacy, whom I'd cheered for countless times in dance class, whenno one else had. I really found out who my friends were.

Annie stopped mein the hall after English. "So, you're going to be a cheerleader nextyear?" she asked sarcastically. "Why don't you play a real sport?"

Again I shrugged it off, but the words boiled in my head. I do play areal sport, I thought. Maybe cheerleading looks easy, but Annie obviously hadnever even tried to move that tightly, jump that high, or yell that loudly, allwith grace and agility.

She knew, too, that cheerleading wasn't myonly activity, and I certainly didn't deserve her sarcasm. Forgive me forbragging, but if lacrosse counts as a "real" sport, I play that, too. Ialso snowboard, play guitar, figure skate, and manage the keep my grades at ahigh-honor level, better than hers. "But that's obviously not whatmatters," I mumbled, shaking my head and continuing to my next class.

A few weeks later I arrived home, anxious to try on my just-deliveredcheerleading uniform. The black skirt, tight white shirt and glittering black,white and silver shell slid onto my body gracefully, as if that's where they hadalways belonged. I tied the laces of the clean white sneakers and pulled my longwavy hair into a ponytail. I looked in the mirror and a genuine smile escaped me.Despite all the vicious comments from those catty girls at school, despite allthe sneers and the sarcasm, for the first time I was proud of what I saw.

"Wow, I'm surprised. You're really one of them now, aren'tyou?" This comment, accompanied by a snicker, came from my former bestfriend, who had come home with me. I really should have taken it to heart - shehad, after all, set out to hurt me, but I wasn't about to let her get what shewanted. Another smile spread across my face as I replied, "Yeah, I am. I'mone of them now." 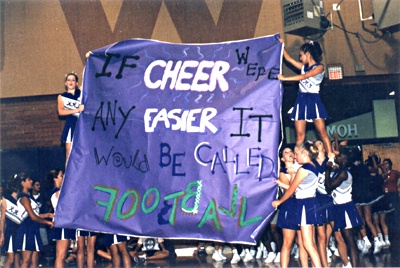