I can still recall sitting in a dismal trance, I can still feel the soft tan carpet between my toes, and the nauseated feeling lining my stomach making me woozy and wanting to hurl. I kept wondering, “Why am I here?”, “How much longer do I have to sit here?”

I peered up just to notice my dad walk up to me, crouch down and whisper to me, "Do you want to come with me?"

I didn't know where or why, but I didn't want to stay. I nodded and reached for his large, warm, hand, it helped me up on my feet and we slowly trudged out the front door. I stopped slid in to my new, shiny, black shoes, and bolted to the car. The car was stinky and it wasn’t ours we got it from a place because we left ours. My stomach was flipping and twirling with each passing moment; I don’t know when but I fell asleep and didn’t notice until my dad shook me awake.

We had finally arrived, he put on his thick black jacket, even though it was well in the summer, and we headed inside, his attire consisted of a large stiff black suite with a matching tie lying over a soft blue shirt, similar to the color of his eyes. As we marched up the pathway, I noticed his shoes seemed especially shinny, almost as shiny as mine, while the Santa Fe sun reflected off of them.

The pathway led to a building that blended in with the cracked ground beneath it, dying plants lining the buildings perimeter separated the adobe building from the dust around it. The interior wasn’t much more lively than the exterior; the walls gave off an eerie feeling which scared me most. They stood bare, with nothing lying on them or covering them. The walls seemed to enclose the room as if to restrain everything within it, like a veins flytrap after luring in its prey.

I could hear noises that sounded like ghosts and ghouls moans echoing off the walls, not until we got closer did I relies, it wasn’t ghosts. "Why are people crying?" broke the tension but only for a mere millisecond, my fathers expression darkened and his grip on my hand increased to the point that I lost all feeling in that arm, but I didn’t want to mention it.

We pursued the echoes to a pair of big oak doors that had a sign that said "Funeral in session" only a blunt question escaped my mouth in a quiet fearful tone at that "What’s a funeral daddy?"
"You'll see" he whispered in a husky tone that sparked my curiosity. I looked up but the light behind his head casted a shadow over his face, which hurt my eyes so I looked back in front of me as my dad opened the dark wood doors.

When we walked in, the room darkened, the air felt heavy, stiff, it seemed hard to walk, let alone breathe, as if everything would shatter with one false step.

Once we reached the front of the room I started to notice people. My Sito, and Grandmother, both in black, and softly crying sitting towards the front of the room, I never imagined that pained, sorrowful expression could touch either of their joyful, aged faces. I noticed many people, who I knew and who I didn’t, softly, silently, voicelessly, crying, holding each other as if life itself depended on it, holding each other as if that could some how make them stronger, braver, less alone.

I asked my father why everyone was crying "shhhh" stumbled out of his mouth like there was an earthquake in his mouth, it escaped with a harsh, yet weak, and shaky tone. I looked up, for my father’s voice never shook, not in front of anybody, not until that day. This time nothing prevented me from seeing what I now saw, there a trickling tributary of tears gently sloping down his cheeks as if to start a pond by our feet. He squeezed my hand tighter and I could only try to squeeze back.

Before I noticed it, we had joined a line of about 15 people in the front of the room, every one looked on the tables to see thing that I could not I could only admire the flowers draping off the tables; everyone ogled at the display of that ever was on the tables as if to memorize as much of each thing as possible before it would all vanish.

Eventually we approached a big, open, wooden box. It was the same dark color of the doors. The man before us had not cried so far but then he looked in the box, water gushed from his eyes and he started trembling, his knees finally gave out on him and he slumped to the ground his body slightly shaking as soft moans and whimpers escaped his lips; a woman walked up to the front nodded at my father and he helped her carry the man to a seat where they sat him down, she sat next to him and cradled him like a mother would her infant as his shoulders shook viciously.

After seeing it deteriorate that man I didn't want to look in, my gut didn’t want to look in, not a single cell of me wanted to look in. Instead I looked at my dad and he nodded. That’s all he had to do for my body to cower and cringe at the thought of what could lay in that box. My heart raced, my chest felt as if it were going to implode at any moment, my gut was knotted up, as I raised myself to stand on the very topmost of my toes, in order for me to see, what I saw when I did, hurt more than any cut or bruise I had ever gotten.

I saw a man, his ghost white hands slightly touched at the fingertips, and his eyes gently closed as if he was in the midst of a peaceful dream. He wore a light blue shirt, like my fathers, I couldn't see what else he was warring he resembled my father so much to the point I believed he was him.

I had an impulse to touch him. I cautiously lifted my shaky hand and set it on his hands they weren’t warm like my dad’s, they were just well cold, his hands looked like a skeleton, I could see every bone in his hand hard, and his skin seemed stiff. I only whimpered in a shaky voice, as my vision begun to blur, and something wet, gracefully slid down my face caressing my cheek. I stood there watching his chest looking for the slightest movement but there was none, he just lie there motionless, I stared as If he would sit up any second and scare me or perform a magic trick.

My dad took my hand and guided my petrified body to a pair of cold, blue, lifeless, empty chairs and I couldn’t help but join the lullaby of united whimpers and sobs, my father hugged me as I did him, I could feel his chest tremble. A Tsunami of emotions arose in me, fear of my surroundings, anxiety, pain in my chest, sorrow , and so many other unimaginable, indescribably, horrid feelings. I cried myself to sleep there, that day, in that dark, morbid, place. Next to my father, I felt safe; if I closed my eyes’ and fell asleep there I would for sure wake up. Unlike the cold man, I would see tomorrow. He never woke back up instead he was placed 6 feet underground and I would never see him just as he would never see me or my father again. 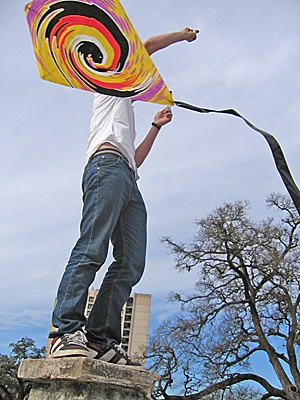