He greeted me on a Friday night in the park where we’d first kissed, where murky lamps lit the darkness alongside the alabaster moonlight. Hey, he said. I kissed him, nervous.

Something was off, and I knew it. It was the way he held my hand so loosely, the way he couldn’t form the words to tell me what he needed to say, the way the texts he’d sent me that afternoon, “we need to talk about our relationship,” scared me. We walked and I laughed, told him to say whatever he needed to say, because no matter what I would listen. If he said it, I would be okay with it. I thought he was going to tell me we shouldn’t have sex anymore.

We promised to still be friends forever when he broke up with me. I cried into his chest as he told me it was too hard for him, having to hide our relationship from his strict dad. I cried as he told me that maybe it wasn’t permanent, and I cried when he told me he loved me. I loved him too.

We sat in the middle of the park, my head pressed into his shoulder, stopping only occasionally to wipe mucus and tears on my jacket sleeve. I told him I was a mess and he said he didn’t care, and held me. We went to my car when it got too cold to breathe, and sat there warming our hands in the crusty heater. We climbed into the backseat after a while, and I rested my head on his chest as he described to me a fight at school, I mentioned how a friendship that had ended badly was getting to me, and we talked in a way that seemed like we’d never broken up.

I buried my face in his neck, and told him I hated not being able to kiss him anymore. He looked at me. There’s no rulebook, he said, and kissed me. Breakup sex turned out to be more enjoyable than I’d have expected, because it was with him. We would be broken up the next day, we decided, because it was too hard not being able to be with each other. One last night—that was the promise.

I saw him on Saturday afternoon. We barely talked, and I went home and pressed my face into my hands and tried to make the hurt stop. But it didn’t, and it wouldn’t. I texted him to let him know we needed to talk; he texted me back saying he was busy with his dad, and not to text him again. He always told me that when he knew his dad might take his phone, but somehow, it felt so different this time.

We talked the next day. We sat on a curb in the cold October breeze and I spelled out everything that was wrong with us. He hadn’t committed, we were over; it hurt to be around him. I couldn’t do it, I said. I couldn’t be around him anymore, couldn’t see his face and not want to kiss him and hold him and love him. I had to move on, because I couldn’t put my life on hold for someone who wasn’t willing to fight for me.

He didn’t fight for me in that conversation. He sat back, watched us fall apart for good, and let it go. I’d told myself I was done crying, but walking in through the door of my house again, I let that promise slip. Just like the promise I’d made with him: friends forever.

I can’t say what happens in the rest of the story. I can’t say whether I’ll see him occasionally, pulling out of his driveway in his house two doors down from me, and whether we’ll eventually be friends again, but I do know it will hurt. It will hurt until the day comes that it’s okay, and I dread that day because it means not loving him anymore. It means not caring about the way his hand feels in mine or his adorable blonde arm hairs or the feel of his neck against my lips, the sound of his voice. It means not seeing him on my porch in the mornings, not taking walks so long we get lost in our own town, not knowing he’s mine anymore. It feels like everything will change, but surprisingly, little will. He will fade, but as the cliché goes, life goes on.

And it will. In a little while. 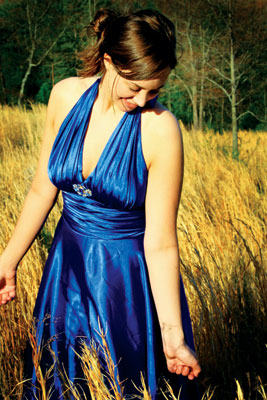