The United Nations Convention Against Torture and Other Cruel, Inhuman, and Degrading Treatment and Punishment (the “Torture Convention”) defines torture as any act that intentionally inflicts severe pain or suffering, whether physical or mental, on a person in order to obtain valuable information, a confession, punishment, or to arouse fear. The powerful have used torture throughout history to maintain their power, and the weak have used it to gain power. The Code of Hammurabi reveals the lack of mercy Babylonia had; blinding, lashes, and cutting off digits were all common forms of punishment and instilled fear upon their enemies. In the present day, some believe torture is still the most effective means of controlling people. Others however, view this method as immoral regardless of circumstances. Regardless of historical and even government-approved use, torture as a method of obtaining information from detainees or to punish those who have committed heinous crimes is unacceptable in the mondern day. Despite its proven ineffectiveness and the availability of other methods, torture is still used. Even with new international legislation, new torture programs are developed and kept secret to the public. Undoubtedly, the ethics and morality of torture are questioned, and many consider it to be a violation of basic morality.

When torture is used, it is often in dire cases and more often than not, victims of torture lie to interrogators in hopes of the torture stopping, jeopardizing the quality of the information. When bombarded with unpleasant stimuli, psychological and physical, trauma inflicted to the brain causes it to shut down, compromising memory. Although there is limited documented human experiments on torture, it is known that sleep deprevation, stressful positions, starvation, and freezing all affect the brain’s ability to retain and process information; all of which are used as modern torture. In 2014, a study conducted by professor of psychology Jane Goodman-Delahunty concluded that when interrogators respected detainees, a confession was four times more likely to happen. Statements were also fourteen times more likely to be procured early on in an interrogation when mutual-trust was established. This “new” theory was also in practice during World War II. Nazi Germany is infamous for their cruel treatment of “enemies”; their interrogation programs were one of the many ways they held the upper hand at the begining of the war. Yet some Nazi interrogators did the exact opposite of physical harm. Hanns Scharff, master interrogator of the Luftwaffe, used “tools (of) kindness, respect, empathy, and guile.” He would often go on long walks with the prisoner, let them read the newspaper, treat them with good food, and a warm bed. Many of the prisoners that were interrogated do not even know what secrets they told Scharff; his techniques were unlike those that were previously used on them and were unexpected.

Prior to the two World Wars, the 1864 Geneva Convention was adopted to protect and identify those who were neutral in hostilities, such as medics and volunteers, but there was no substantial international legislation pertaining to torture and interrogation torture of prisoners of war, terrorists or felons. As a reaction to the catastrophe of World War II, additions to the Geneva Convention were installed in 1949, along with three new protocols afterwards, in 1977 and 2005. Article 17 of Convention III states, “No physical or mental torture, nor any other form of coercion, may be inflicted on prisoners of war to secure from them information of any kind whatever.” This applies to all citizens from the 196 states who have ratified the Geneva Convention. The United Nations also proclaimed the Universal Declaration of Human Rights in 1948, the first time fundamental human rights were written and universally agreed upon, which states in article 5 that “No one shall be subjected to torture or to cruel, inhuman or degrading treatment or punishment.” Afterwards, the United Nations created the Declaration on the Protection of All Persons from Being Subjected to Torture and Other Cruel, Inhuman or Degrading Treatment or Punishment (the “Torture Declaration”) , and with that, further worked to create the Torture Convention which was adopted by the General Assembly in 1984. Article 2.2 of the Torture Convention states “No exceptional circumstances whatsoever, whether a state of war or a threat of war, internal political instability or any other public emergency, may be invoked as a justification of torture.” As well as article 4.1, which criminalizes acts of torture. With these new international laws restricting the ability to harm people in hostilities as well as civilians, there are no legal grounds for torture to continue to happen in the present day.

The idea of morality in relation to torture has also been often questioned. Torture was reserved solely for outsiders, as early as ancient Greece, demonstrating an ingroup bias.  Medieval Europe saw similar moral codes, with torture being rare for citizens, save for serious criminal offenses such as heresy. However, as early Renaissance era Europe was plagued with conspiracy, torture was used as a means to extract a confession or as punishment. These methods of torture were physically painful and not used sparsely. But by the late eighteenth century, the morals of Europe shifted once more. In an exchange with Louis Alexandre Berthier in 1798, Napoleon Bonaparte wrote “The barbarous custom of having men beaten who are suspected of having important secrets to reveal must be abolished. It has always been recognized that this way of interrogating men, by putting them to torture, produces nothing worthwhile. The poor wretches say anything that comes into their mind and what they think the interrogator wishes to know.” By 1851, torture as a form of captial punishment was abolished in Europe.

Yet torture returned in the 20th century, with the specific objective of procuring secrets. There are numerous theories as to why the sudden resurgence arose but many suggest that it is due to a perception of imminent threats. During the 20th and beginning of the twenty-first century, the world suffered the colonization and suppression of African countries, the rise of fascism, communism, and the fall of dictatorships resulting in many civil wars, two world wars, the Vietnam war, the Cold war, and the rise of terrorism. In all these cases, government secrecy was considered vital; not everyone can be trusted in times of crisis. Even now, many Americans do not know what their government has permitted as “techniques” to terminate terrorism against the United States of America. The “enhanced interrogation techniques'' developed by psychologists James Mitchell and Bruce Jessen for the CIA to use at black sites are still kept mostly confidential. Currently, it can be estimated that there were at least a dozen CIA blacksites dedicated to “enhanced” interrogation of suspected terrorists and capital offenders with hundreds of detainees, more than a quarter of them not meeting the standard for detention, and 39% of detainees subjected to the “enhanced interrogation techniques.” Hundreds of hours of footage has been deleted, the Senate's report on what happened is incomplete with holes in many stories, and most cases are still classified. Without knowing what is taking place, how can the public trust their own government?

It is evident that the usage of torture has increased since the last century. Torture, under international laws, is illegal regardless of circumstances. Working with many States and non-governmental organizations, the United Nations have created three main conventions and declarations in hopes of preventing the mistreatment of all people. Yet this method of punishment and interrogation is still used by many countries worldwide despite its flaws. However, most concerning is the lack of morality. Governments will do whatever it takes to eliminate the perception of threat, including purposely harming others and hiding this information from their citizens. There is no need for torture in the twenty-first century and with the hope that the future contains less conflict, there is hope that the torture will finally come to an end.

Bibliography
"Convention Against Torture and Other Cruel, Inhuman, and Degrading Treatment and
Punishment." OHCHR. ohchr.org/en/professionalinterest/pages/cat.aspx.

Filkins, Dexter. 2015. "How Did Abu Zubaydah Lose His Eye?". The New Yorker.
newyorker.com/news/news-desk/how-did-abu-zubaydah-lose-his-eye.

Hamblin, William James. Warfare in the Ancient Near East to 1600 BC: Holy Warriors at the
Dawn of History. Routledge, 2008.

Napoleon, and Jay Luvaas. Napoleon on the Art of War. Simon & Schuster, 2001.

Wilbur, Del Quentin. "FBI Gets An Unexpected Lesson From A Former Interrogator For The
Nazis". 2016. Los Angeles Times. latimes.com/nation/la-na-fbi-nazi-interrogator-20160610-snap-story.html. 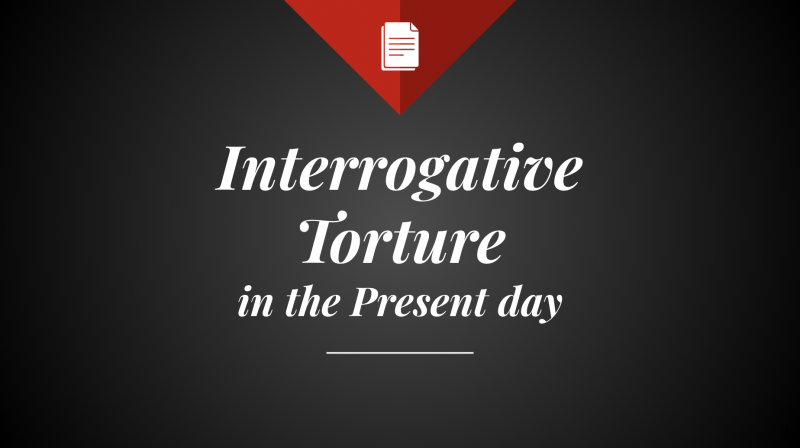