"It manipulated facts for strategic purposes, exaggerating the scale of LRA abductions and murders" says Foreign Affairs (Kony 2012). This is just one of many complaints about the new short film Kony 2012, all stating that there is a massive over exaggeration of what is really happening. The film makes the country of Uganda and the population of this country extremely frustrated. Even though this film promotes global activism, it is highly criticized for painting a black and white picture of what is really happening and making it seem that is simple and easy to capture him. People have started to donate and buy Kony 2012 merchandise however little do they know that 60% of all of their money that they donate go straight to Jason Russell, for his own personal use. I do not support Kony, and agree that he should be caught, but do not believe that this is the way to do it.

Since the release of this video IC or International Court has come under criticism for oversimplifying the issue and slacktivism. Mikaela Luttrell-Rowland, a liaison officer for the Clark University's Strassler Centre for Holocaust and Genocide Studies, stated that it was "irresponsible to prize feel good, simplistic messages over complex history and to treat consumerist-consciousness raising as interchangeable with education. " African researcher Alex de Waal even expressed that the video was “naïve” for “elevating Kony to a global celebrity, the embodiment of evil.”(Kony 2012) This may even help him as a terrorist and cult leader instead what they should have done is “demystify Kony and reduce him into a common criminal and a failed provincial politician.”(Kony 2012) Even another indirect participant in the anti Kony project known as War Children says that “just getting rid of one person does not solve the problem"(Deadly Riots) and the film's focus should have been rather on helping child soldiers than ridding of Kony. Anne Goddard, president and CEO of ChildFund International, wrote that "by narrowing the focus on Kony, by defining success so singularly, it gives people a greater sense that the issue [globally widespread conscription of young children] can be resolved. And that hope feeds on itself in a way that becomes infectious."(Kony 2012) Not only are civilians frustrated with the unclear facts that this video produces, but even professionals that are experts in the same cause also agree that this video is misleading and that they had oversimplified the problem, making Kony more powerful.

One of the main points of criticism is that the video gives major misleading information on both the whereabouts and magnitude of the LRA. Now Kony’s followers are thought to be reduced to numbers only in hundreds, also Kony is believed to be in the Central African Republic rather that Uganda – this only has a short passing mention in the video.(Kony 2012) There has been large growing in criticism in Uganda especially because of the videos lack to state more clearly that Kony and his troops, with the child soldiers, had moved north and now are spread through the forests of neighbouring countries. Arthur Larok, ActionAid's director in Uganda, said "It doesn't sound like a fair representation of Uganda. We have challenges within the country, but certainly the perception of a country at war is not accurate at all.”(Deadly Riots) Dr Beatrice Mpora, director of a community health organization in Gulu, commented: "There has not been a single soul from the LRA here since 2006. Now we have peace, people are back in their homes, they are planting their fields, they are starting their businesses. That is what people should help us with."(Kony 2012) Even the prime minister of Uganda launched a response to this problem on YouTube stating that their country is nothing like what the video had portrayed it as. Inviting people to come into the country to see for themselves, that people would find it a very different place to that portrayed by Invisible Children. (Kony 2012)

On March 2012 they had a mass showing of the video in Lira, the site of one of Kony's worst atrocities in Uganda. In response rocks and objects were thrown at the screen as well at the African Youth Initiative Network, which provided both screening and translations.(Deadly Riots) Angry civilians called local radio stations saying that they had devoted so much attention to the film makers and Kony instead of the victims of Kony, exclaiming that the video was “more about whites than Ugandans”(Kony 2012). Ugandan journalist Rosebell Kagumire said that "the war is much more complex than one man called Joseph Kony as depicted in the video.”(Kony 2012) Even in the United States, dozens of Ugandan diaspora protested outside of the Invisible Children’s offices in San Diego, saying that Joseph Kony is only a fraction of the problem and that by criticizing the Ugandan government for its inadequate response to Kony's terror.

Kony 2012 should be stopped. This “charity” is a huge propaganda scam where both Ugandans and Americans are enraged with. I do believe that Kony should be stopped and that global activism would be an effective way of doing it, however this program is not the way it should be done. Justine Nyeko ("The Leader, LRA Peace Team") condemned the film as "a cheap and banal panic act of mass trickery to make the unsuspecting peoples of the world complicit in the US rogue and murderous activities in Central Africa."(Kony 2012) The statement was obtained by Ugandan journalist Frank Nyakairu, sent to him from LRA representatives in Nairobi, Kenya. With Jason Russell keeping 60% of all the money that is donated, whenever somebody donates, buys a product, or shares this video with someone else, you are making him richer. 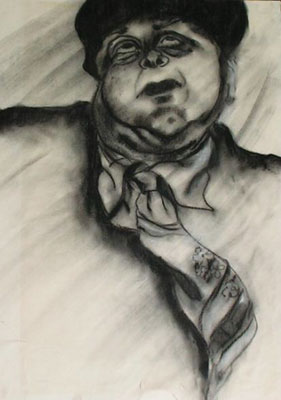 The author's comments:
Not Your Typical Kony Essay. I go against the program
Post a comment
Submit your own