It's been a long day, you worked three hours of overtime, and you deserve a nice meal. I don't know about you, but I'm thinking Arby's!

“That'll be two years off your life. Pull forward, please.”

Fast-food restaurants have become America's answer to a growling stomach. But few realize what they are actually consuming. It may be filling, cheap, and delicious, but the effects of weekly visits to Cholesterol King and Fat Friday's could be damaging your body.

Why are these heavy huts so popular? According to FemHealth, “Affordability is the number one cause of fast-food dining.” For most teens who don't have a thick wallet, getting something tasty and having cash to spare for a movie is like living the dream. Fast-food joints are also a safe and comfy environment for teenagers to hang out after dark.

Unfortunately, consuming high-calorie food like ice cream and apple pie “tends to pack on the pounds,” says Kathleen Zelman, a WebMD weight-loss specialist. And though calories do not break down differently when the moon rises, evening tends to be the most sedentary time of the day, when calorie needs are minimal. Thus, those French fries may look appetizing now, but the muffin top you'll wake up to in the morning won't be!

Nearly all adolescents believe it's their way or the highway, so slogans like Burger King's “Have it your way” draw in customers like the scent of warm Cinnabons at the mall. Virtually all fast-food establishments allow consumers to mix and match their favorites. You can forgo boring old fries for a baked potato with sour cream, and who wants a humdrum shake when a sundae comes with whipped cream and a cherry?

The media has a huge influence on children. When companies like McDonald's lure youngsters by using a clown and a playhouse, what kid wouldn't want to eat there? Forty-three percent of commercials promote sugary cereals and fatty hamburgers, according to WebMD Health News. Parents can try telling their kiddies that fast food has excessive portion sizes, high calorie content, too much refined starch, added sugar, astronomical fat content, and absolutely no dietary fiber, but I doubt they'll listen. I mean, come on, we all know about vitamins A through Z, yet we still skip breakfast every once in a while and push our veggies to the side.

Old habits are said to die hard, but if Americans don't change now they're the ones who'll die sooner than later. Finger-licking fried chicken may please the taste buds but the high fat content can cause an increase in blood pressure leading to hardening arteries, coronary heart disease, even cancer, according to the American Heart Association. You won't be saying “I'm loving it” when you're in the hospital recovering from a stroke. And don't forget that extra calories can lead to obesity and even a heart attack. According to Teen Health, 3,500 calories is equivalent to one pound. Mmm … that sub may be tasty, but is a $5 foot-long really worth the added pound?

Asking a teenager to cut back on fast food is like asking a vegetarian to eat meat. It's not that easy! Incentives for eating fast food are everywhere and the price is cheap, but so are the ingredients. The unhealthy additives available at everyone's beloved drive-through can shorten your life and mess up that sexy figure (no one wants to see a Big Mac in a bathing suit).

So ignore the cravings and take the time to enjoy a home-cooked meal once in a while. That Happy Meal won't make you smile in the end. Take a healthier lifestyle for a test drive, what do you have to lose besides those unwanted pounds? 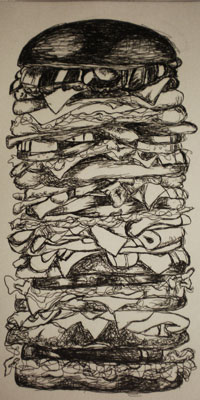 View profile
I think this is well-written, HOWEVER there are many many generalizations that I don't think are very accurate considering, well it seems, that you're going for a factual piece here. Ex - saying "nearly all adolescents", and stating that "few" realize what they're putting into their bodies. While you can make that assumption, it's not necessarily true. I'm not bashing at all - just giving some constructive criticism that I was given myself that helped me think more about what I was writing. Good luck with future writing projects!
nikii7777777777 said...
on Nov. 28 2012 at 3:47 pm
do you knoe that if fast food restraunts closed down america would loose billions of jobs
NeverFallTooHard PLATINUM said...
on May. 9 2010 at 10:51 am
NeverFallTooHard PLATINUM, Hartford, Wisconsin
24 articles 5 photos 98 comments

Favorite Quote:
Reason is powerless in the expression of Love.~ Rumi
Realisim, in painting, is what one wants to see, not what they really see. ~ Janet Fish

View profile
I really enjoyed the introduction. After reading this, I could only shake my head, wake up and think twice about what I eat. The entire article kept my attention and it was easy to follow and understand. Plus, the ending was very positive. As a persuasive essay, I'm persuaded and 100% on your side. Good job and keep writing :)
jesusfreakgirl said...
on Dec. 10 2009 at 11:49 am
That was very well written! I liked all the idioms and phrases you put in there. It was a very convincing and sobering article. Keep up the good work!