Falling into the Darkness | Teen Ink

Falling into the Darkness

Favorite Quote:
"A good snapshot stops a moment; a memory, from running away."

I woke up in my parents’ bedroom.
What am I doing in here? How did I get in here? What’s going on? Did I come in here...
Then sudden panic sunk in.
I couldn’t get out of the web of blankets that I was under fast enough. I kicked the sheets off and threw the comforter out of my way, throwing myself in the direction of the door. My hands frantically searched for the doorknob, once finding it twisting it left, and then right. It was like it wasn’t working; no matter how much I twisted it I couldn’t hear the “click” of the opening. While in the mist of opening the door, I was looking over my shoulder. The darkness started at the left, upper corner of the room. And it was cloaking the walls, the furniture, the floor, slowly. My heart was thudding, my breath was ragged, and little driblets of sweat were running down my neck, although it was very, very cold in the room, so cold chills ran down my spine… then started the blood curdling screams. The screams were a mixture of agony, pain, and sorrow. Whales of cries were very faint in comparison to the screams. I sunk down my back to the door, grabbing two fistfuls of hair, adding my own screams to the evil song.
“Leave me alone!” I shrieked. When I screamed, it was like a whisper. Although the screams were coming from the pit of my stomach, I couldn’t compare to the immortal sound. I asked myself why I was so scared. Why when I woke up I felt such an urge to get out of the room. Why I remembered it. I couldn’t come up with a logical reason! But yet there I was, my eyes bugging, and my heart thudding. And more, why wasn’t anyone helping me. Why couldn’t anyone hear the screams? Why couldn’t anyone help? And why were they here, torturing me?
Then I remembered the dream.
I remembered the detail, the sounds, and the sacredness of it all. I was young when I had this dream. 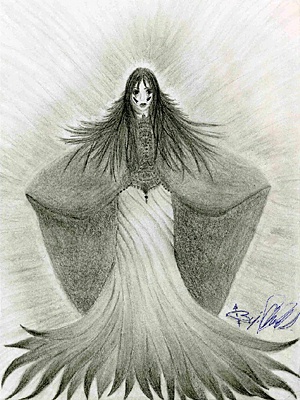 The author's comments:
The story behind this is actually a fun tale to tell.
I was drifting to sleep one night when I found myself thinking about what I wanted my next short story to be about. I fell asleep and had a dream - a nightmare, and I woke up and thought it was a metaphorical thing. About being trapped and couldn't get out; all of that non-sense.
After thinking about it, and realizing that maybe it was me telling myself, "Hey! This is your new short story, write it!"
I obeyed, and once I started writing, I simply could not stop.
Post a comment
Submit your own