It was a sunny day in Carsonville. Carsonville was a small town dotted with buildings and small restaurants. It was located just off the coast, an hour's drive from the beach. Children were running around seemingly unaware of the strange happenings on the other side of town.

Chief Officer Erikson was aware of the strange happenings, and shook his head at the bewildering state of things."Um, Cheif? I...uh...may have sat on a colony of red ants..."This was indeed was happening to Officer Tom, a fairly new member, fresh out of college. It did not help to have inept partners on the job, and tom was an ideal example. Erikson sighed, wiped his sweaty forehead, and started analyzing evidence. "As you can see, there are several long scratch marks on the side of this building, about three inches in length and one inch in depth."

A few feet away from it, there was a small fragment of something, and Erikson picked it up, and put it in his pocket, paying no further attention to it.

Back at the Carsonville headquarters, his team of forensic analysts took a look."As you can see by the length of his strides, he is about six feet ten inches. scratch marks are quite deep, So you can expect it came from a thick, broad long knife, with a wide edge, almost a sword, but eh looks of the scratch marks length. The setting of the crime was next to a closed down gym, and the victim remembers waking up there. The so-called 'Murderer' is a failure, and this was obviously his first time trying to kill someone."Davy, the lead analyst, looks amused by the evidence."We are trying to capture a very tall basketball player who in his spare time slices steak with a katana."Davy leans back in his chair, trying futilely to cover up a laugh at the description of the man.

Tom, finally contributing, says, "This is a local crime, right? because the gym is slightly hard to find, and only a local would know where to go."Erikson, calmly listening to this, widens his eyes in surprise, because he knew that none of the locals match this description. Day, a quick thinker, goes pale with fright, his amused expression gone from his face, not dissimilar to flowers in winter."There is only one place this 'man' would be from, if not here..." Erikson nods solemnly, connecting the dots."The forest." He sighs again and pulls on his coat. He needs a break from this case, and he knows just where to go.

As Erikson drives away, he thinks about the legend of the forest. all the kids have heard of the forest legend, at one time or another.

There was a man named Jones Blunt. Jones lived with his only son because his wife died several years before. They lived at the borders of the town, right next to a dark forest. His son, named Jack, was his only companion. He was fourteen years old, and he was helping his father cut down trees in the forest. He well into a river when his father stumbled and put his hand on Jack's shoulder to balance himself. Jack drowned, and Jones had lost his only companion.

The story gets unclear, but it is said that Jones went mad with guilt, and ran away into the forest. The town's inspectors searched for him, but they could not trace him. Over time, he was thought to be dead, but people have found strange claw marks on the ground and trees, and occasionally a mutilated animal, such as a deer, with an ax wound in its head. People have avoided the place since then and used the tale of the forest to scare their children to behave.

Erikson pulled over at Hunters Inn, an Inn known for having the most taxidermied animals on the wall. He sat down, listening to the familiar babble of voices talking about one thing or another. A carpenter, named Will frequented the place, and was always bragging about his job."I got myself a new ax, a real beauty. sharp enough to cut bones, I reckon."Erikson frowned at the man, knowing that he was fond of referring to the story of The forest madman, Jones."What kind of ax is it, Willy? "Erikson asked.

"It's a big ax, but what caught my eye was this."Will leaned toward Erikson, and lowered his voice."It's an old ax, but very sharp. the shop owner, whose grandfather was friends with Jones, said that it is the same type of ax as Jones's ax. It must be good if Jones sed one of them to chop a deer clean through the bone."Will leaned back, satisfied with sharing this info, and ordered another drink. Erikson had an idea and asked will to take him to his car to show him the ax. Will was ecstatic that someone was showing interest in it, and got the ax out of the trunk of the car. Erikson gasped and ran toward his car. He started the engine, and drove off to the forest, leaving a very confused Will standing with an ax in his hand. Once Erikson got there, he ran into the forest. He ran until he found the place where Jones' son was said to have died. He studied the are for footprints, oblivious to the footsteps approaching behind him."I knew you father," Jones said, stepping in front of Erikson."He was good friends with my son." In Jones' hand, there was an ax, but when Erikson studied it closer, he found what he was looking for. a small gap, near the edge of the ax, no doubt from years of cutting bone and neglect. Erikson dug into this pocket, and held up a piece of an ax's blade, fitting the gap of the ax."You tried to kill her! What did you have against her?"

Jones, sighed and sat down on a nearby tree trunk. He suddenly looked very old, sitting there."It was a normal day and I went into the forest to chop wood with my son. I hated my job, and I wished I could get a different one, away from the forest. My son, though, insisted we stay here, and was very adamant about it. that day, my resentment peaked and I need to find someone to blame. I blamed my son, Jack. I pushed him into the stream and was just about to leave when I saw a flash of movement next to me. It was your father and his fest friend. they came here to play and skip stones but instead witnessed me killing jack. I killed your father, but his friend ran away. After a few years, I killed his friend, but I got paranoid that he had told his daughter. I then planned to kill her. But, now I know that she knows nothing. her old man was so shocked by what he saw all those years ago that he went mad, and was transferred to a nursing home in town. now, nobody knows. I just need to kill you." With that, he lunged forward, swinging his ax.

Erikson ducked, and made a desperate leap in the direction of his car, and was only a few feet away from it. But, It was too late. Jones stood in front of him, ax held high."I've killed your daddy, and now I'll kill you!"He laughed maniacally, his eyes glinting in the setting sun, and swung his ax. The blood coated his ax and flies swarmed almost immediately. Thus, the legend of the forest lived on. Erikson was labeled dead, but nobody ever found his body. Over the years, people moved away from the city, until only Jones was left. Jones died at a ripe old age, happy and alone. Carsonville became a ghost town, and it is said that if you pick up a fragment of metal, like a piece of an ax, you are fated to die there. That is the story of Carsonville, the ghost town of the Ax murderer. 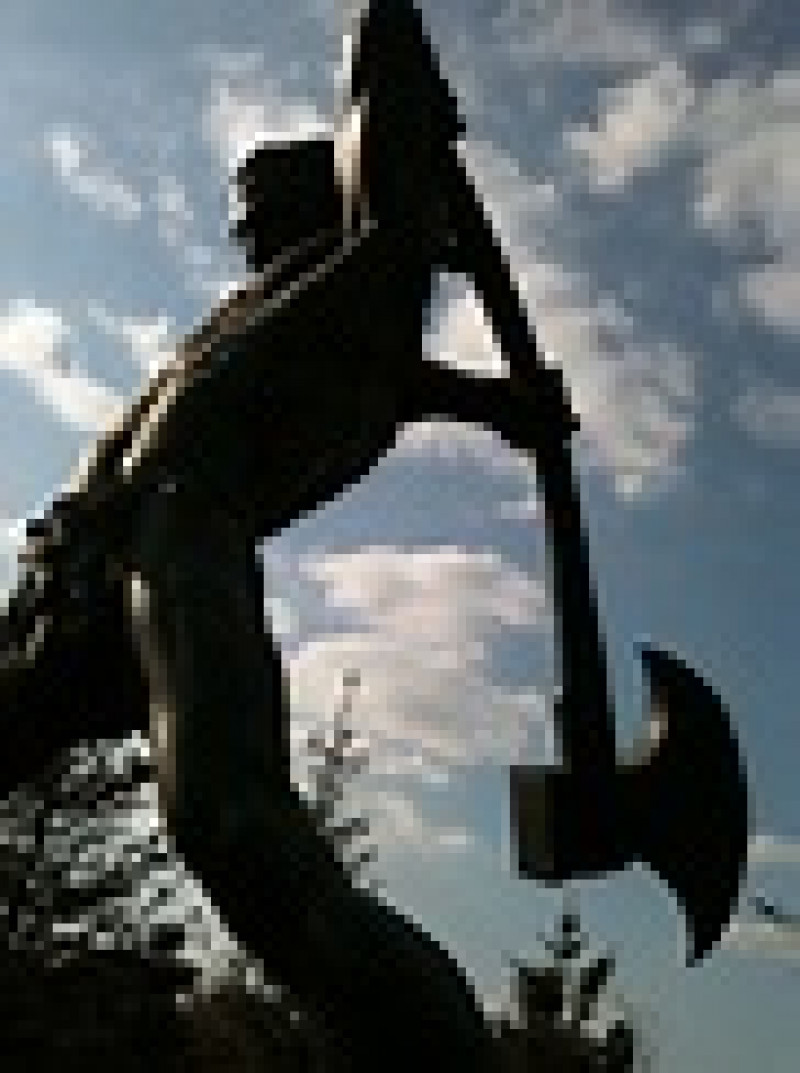