“Look inside of yourself,” He sat across from the boy, hunched over with his chin resting in his hand. “What do you see?” he asked.

“Yes, you do. Stop struggling against the pull of the truth. See what it wishes to show you.” Carter said quietly. His eyes were closed but it was as if he could see the struggle clearly on the boy’s face without them.

“I see a lot of gray. That’s all.” Jeb said at last. “I see red spattered against the gray backround. What does it mean?”

Carter was silent. Then he spoke,

“I wouldn’t know. Only you know your deepest self.”

“There’s flashes of green and yellow. It’s blinding me!” The boy’s closed eyes began to twitch and he desperatly wanted to open them. He began to squirm in his seat. It hurt too much! “There’s wind; it’s pulling me down! I can’t stand against it! It’s cold!”

“Don’t stuggle, boy! If you begin to struggle again, it is all lost.”

Jeb slowly began to relax again. What he saw put him into a trance.


Inside his mind’s eye the wind had changed. It no longer tore at the boy’s body. The flashes of light had gone as well. Everything was peaceful. He saw nothing. His mind was empty. He had no feeling of anything, inside himself or in his surroundings. He could no longer sense his body. It was gone. He was being lifted into clear nothingness. the worry was gone. The struggle was nonexistent.
Although all sensation had left him, he could feel something. It was the sensation of floating. Floating on a sea of clouds. It was cold. The wind was gone, but the cold still chilled his mind. He went numb.
A calmness, so powerful that it lifted him, was starting to fall. Anxiety wormed its way into the back of his still clear mind. A noise, like that of finger nails being dragged down slate, tortured him into a state of blind confusion and torture. The wind picked up and dragged him down in agony. The wind was too cold to inhale. He could no longer breathe; a black cloud of smog was suffocating his being.


Sweat poured down Jeb’s young face. It fell onto his loosely woven tunic. His relaxed face began to grimace and scrunch with pain. Carter could feel the pain and angony fill the room. Then he felt something else. The boy had stopped breathing.

“Jeb! Jeb, it’s time to come home! Breathe, boy!” Carter slapped the boy’s face, trying desperatly to draw the boy out of his painful and confused state. “Please wake up!” He hit Jeb firmly on the back with his bare hand, bringing him out of his coma. Jeb fell gasping to the floor. His face was blue from the lack of oxigen. He coughed and caught his breath long enough to ask,

“Where was I?” He fell into a fit of gasping and caughing again.

“I’m not sure.” Carter lied. Then he threw open the curtains on the one large window. Sunlight brightened the room. A warm patch of light threw its rays on the trembling and caughing figure, curled up on the hardwood floor. His eyes were skrewed shut from the pain. In the light he looked much worse than in the dark of the one room house. Carter shifted his gaze from Jeb to the window.
Outside was colorful, bright, beautiful, and life- filled. What Jeb had seen was the complete opposite. He could not send him out in the world again without explaining. It would be too dangerous.

The boy had resfused to eat that night. He had sat there, facing Carter, and staring at the plate of untouched food. When Carter had finished and had begun to huridly clean the table, Jeb continued to sit motionless. He stared out into nothing. As the minutes turned into hours Carter began to feel a strange thing everytime he looked at the boy. His skin began to change color and his eyes no longer tracked. Something was wrong. Carter was beside himself with worry, and so he tried to forget that anything was wrong and pushed it far from his mind.

“Jeb, do you know what death is?”
Jeb, now curled up on a rug in front of Carter’s fireplace, said nothing. His back was turned to Carter. His eyes half closed to the warm snapping flames. Night had fallen long ago. Carter rubbed his forehead with his wrinkled hand. He breathed heavily and said,
“You glimpsed what it would be to die, Jeb.” He paused and stared into the fire. The words hurt as he said them. “You would have never seen any of that if not for a reason.”
Jeb never stirred, but Carter had no doubt that he was listening intently.
“Life is precious, and you almost lost it all today. No doubt that you have lost something in that little venture that I forced you through.”
Jeb turned so that he lay facing the old, tired man. His eyes gleamed dully. They were a colorless gray. Something had changed. His eyes had been green, the greenest around. They had no color anymore; no life.
They stared unseeing into Carter’s face. Or were they seeing? Were they seeing things Carter didn’t even know? This frightened him and he avoided making contact with Jeb’s unblinking, colorless eyes. The firelight flickered in them, illuminating their depth and lifelessness.
Jeb stood and moved toward the huge, bolted, wooden door. His movements were rhythmic and smooth. His skin, normally a light brown, was white; a transparent white that set off a glare when it caught the light of the flickering flames. He lifted the bolt and then turned and looked back at Carter. Carter had not moved from his chair by the fireside.
“You have been chosen, Jeb. If you leave now, all has been lost, and you’re as good as dead. No, I rephrase that; You are dead as soon as you step out without the tools I will have given you in the morning.” Carter’s voice was low and deap, but no longer containing the feeling and affection it had once held for the boy. “You must let me explain before you go. It is for your own protection!” Carter raised his voice to a louder tone, but all emotion was soon gone once more.
Jeb opened the door. He did not turn and say goodbye to his master, his father. No doubt he had forgotten whom the man who had raised him was.
Carter waited until the door had clicked shut and he no longer heard the steps of the boy. He then stood and made his way to the window. He stood there and watched as the boy walked across the newly fallen frost. Like a ghost, he had become. As he glided noislessly across the yard, past the gate, and into the woods. His now almost transparent skin melted into the dark scenery of the forest. He was dead. He had been dead ever since he had entered his stupor of a dream. And it was all Carter’s fault.
Carter wished he had tried to stop the boy from letting the death take him, but he had wanted to know so badly. His need for knowing had killed Jeb. Not physically, but something deap inside had stopped. And it showed. Carter shivered. He should have stopped the boy from leaving, but he had been afraid; afraid of his own flesh and blood. His only child. He had been afraid of the death that consumed Jeb’s transparent body and colorless eyes.
He could no longer stand still, just looking out into the dark world of night. He had to do something. It was his fault that this had happened and if he didn’t do something, life would cease to exist as it always had. He had tampered with powers greater than himself and those powers had been re-awakened in the body of this boy. This boy that was now no more than a walking corpse. 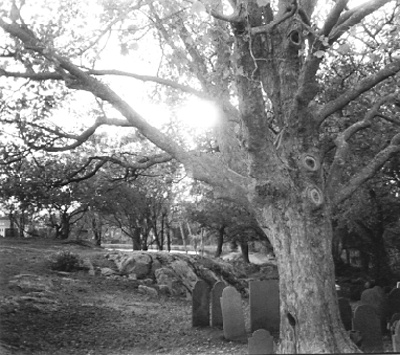 The author's comments:
This was an interesting piece to write. It's sort of morbid compared to my other works and contains things that I don't even understand. The story just flew through my fingers. most of it did not come from my ordinary everyday imagination.
Post a comment
Submit your own