There is a boy on my bus who is… different, special. He sits in the same spot every single day, the seat right in from of mine. He always gets on at the same stop, and gets off two stops before me. He never talks. His headphones and beanie are always on, in fact, I don’t think I’ve ever seen him without them. He’s handsome enough, but not to the point where I think he might have a girlfriend. Right before he sits down, he gives me a little smile.

One day, he didn’t get on the bus. All of a sudden he just wasn’t there anymore.

I missed looking at the back of his head, which always bore a differently colored beanie. On a particularly bad day, when no one talked to me or smiled at me, I got on the bus and got off at the boy’s stop. I walked the route he always seemed to take after exiting the bus. Five minutes after turning the corner he would constantly turn, I was standing in front of the city’s largest hospital. All of a sudden, it all made sense, the beanie, the consistency of his patterns. He was sick.

I entered the hospital and asked about the children’s cancer ward. The nurse at the desk called me sweetie and directed me to the eighth floor. I stood awkwardly in the elevator listening to Jack Johnson. I didn’t even really know who I was looking for. What was I doing here?

The elevator stopped at the eighth floor with a *ding* and I got out. I could tell almost immediately that I was definitely in the right place. The atmosphere was as lively as a place like this could be, but it was obvious that several hundred kids had made this floor their home.

I went up to the desk and a man with a kind face looked up at me, “What can I do for you Miss?”

I didn’t really know what to say, so I tried to explain why I was here. “I’m looking for a boy…”

“Well, that’s great, but are you sure you want to look here?”

I looked at him oddly, and he gave me a big smile. “I’m messing with you. What does this boy look like?”

I chuckled. “He’s tall, and he always wears a beanie. I’ve always seen him with headphones too, but I don’t know if he only wears them on the bus, or if they’re like a third arm to him.”

The male nurse’s eyes lit up, “You’re looking for Caleb.”

“Room 813, down that hall,” he pointed to a hallway on my left, “and take your first right. The doors are numbered.

I found the room easily enough, and peered into the window before knocking, just to make sure I had the right guy. I did. The boy (Caleb) was standing in front of an easel, located right beside his room window. His hand held a brush, and he seemed to be painting with a magical touch. I knocked.

Caleb turned from his painting, and walked over to the door. He opened it swiftly and looked me up and down, a grin on his face.

“Well, whatdaya know. Girl from the bus. How’d you find me?”

“I noticed you weren’t on the bus the past few days, so I just kind of walked in the direction you walk when you get off the bus.”

He smiled and leaned against his door frame, “Ah-ha, so, you watch me.”

“I don’t watch you, I just happen to be looking in the direction you walk when you get off the bus.”

I nodded and walked in. Caleb sat down in one of two chairs angled for access of the perfect view outside his window.

He motioned to the one beside him, “Please.”

“That I am, that I am. However, now that we’ve established who I am, who are you? And why did you decide to look for me?”

He looked at me expectantly, “And…”

“And I don’t really have a lot of people in this world, but somehow without really knowing you, you were always there. You smiled at me every day, and today was the first day I realized how much it really meant to me.”

“Well, I should tell you before we enter into what I see becoming a marvelous friendship, that I don’t really have much time left here.”

“Nah, this apparently lonely world you don’t seem very excited to be a part of.”

I was taken aback. “I never said that. I said…”

Caleb raised his hand as a sign to silence me. I stopped talking.

“Look,” he said, pointing out of his window, “look out there. Look out at all of that. You’re telling me you can’t find a single person from out there without having to follow me around? Di, I’m going to call you Di.”

I smiled a bit.

“Di, there is a world of adventure out there. A world full of interesting people who do interesting things.” He paused. “Do you know why I chose this hospital?”

I shook my head.

“Because almost every single room has a perfect view of the park. Do you know how much goes on in a park?”

“A lot Di. A lot. I’ve seen everything from this window.”

“Hold up, you witnessed a murder?”

“What? I told the police about it and even testified in court.”

“Do you really think I’m scared of death?”

“Anyways, I’ve seen good stuff too. I’ve been a spectator during proposals, graduations, I even saw someone give birth, right down there.” He pointed to a bench a little ways away.

“You. Your whole attitude. Your smiles, your happiness. You find people who need pep talks, lure them into your life with your beautiful smiles and then convince them how much there is to humanity, to the world.”

“Oh god no. This has never happened before. Apparently I only hold this ‘smile’ power over you. And I never said anything about humanity. Humans in general are pretty s****y. We start wars, we murder, we hate, we promise things and then we break those promises. We’re racist and sexist and homophobic. But then there are people like you and me.”

“What makes you think we’re so much better?”

“We’re not better. We just seem to care a little more than the rest of them. Well, at least I do. I don’t know your views on murder or homophobia.”

“Not too thrilled about them.”

“I knew you and I would be good friends.” He smiled and reached over to pat my shoulder.

“How long do you have left?” I asked, not really wanting to know the answer.

“Month or two. Doc says I’m a lucky guy though. Last time he said I had a year and I ended up staying alive for three. I tend to surprise people. My parents thought I was a girl before I came out of the womb, they even named me Kylie. Guess stuff just doesn’t work out sometimes.”

He reached over and took my hand, “Me too, I don’t think you would have been as taken with me and then we wouldn’t have met and I wouldn‘t have been able to tell you about the joys of life.”

We were silent for a minute or two, before I asked timidly, “Well, what do we do now?”

He got up with purpose, “Now,” he said rather forcefully, “we get jello.”

I shook my head, got up, and followed him out of the room. 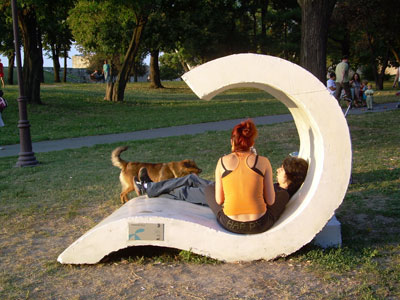