“I can relate there.”
“Really?” He wrinkled his nose. “This was arranged?”
“I haven’t even met this Tristan fellow.” She admitted.
“He could be a major pig!” Her new friend cried, his eyes opened wide.
“I just wish I could have at least met the man. I know nothing about him.”
“Do you think he’s five foot one, with long white hair, a matching beard and a tendency to walk around only in his slippers?”
“With my luck, I wouldn’t doubt it.”
“You could luck out. He could turn out to a young dashing man of nineteen, with messy brown hair and lake green eyes. He could like to read and ride horses, and could love dogs, and be quite attached to his clothing.”
Understanding drew on Cha`risa. “The name’s Tristan Tanner.” He said, taking her hand and kissing it lightly. “Pleased to meet you.” 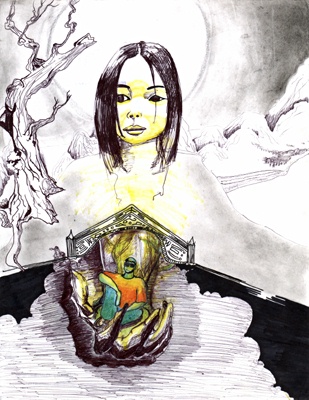