Favorite Quote:
If nothing else, believe in art.
~Unknown

Leah said it gave her a rush, this feeling, where she felt in charge. So she donned her baggy sweatshirt, with oversize pockets, perfect for stashing the illegal loot of stolen items.
Leah was convinced she didn’t have a problem. “I don’t steal anything big, or important!” She would say, as if it was an adequate excuse. Leah loved the cosmetic isles, all the little bottles of nail polish, and tubes of lip gloss. No one would notice her plucking one from the cold metal shelf, and slipping it into her pocket, would they? Leah felt no shame, no guilt, only the so-called “rush”. Melissa was really seeing how much her friend had changed. It all started a year ago, when Leah’s parents got divorced. They stopped paying Leah any attention and Leah spent many a night, sleeping over at Melissa’s, to get away from it all. Then she turned to a new therapy, retail therapy.
In the beginning, she would pay for the things she got, but eventually her cash supply drained, and Leah still needed the stuff! Melissa remembered the first time Leah stole something. They had been at a gas station; Melissa was getting a soda, and bought Leah a candy bar. While Melissa bought the snacks, Leah browsed through the shelves and stumbled upon a small round keychain that said “Don’t Hate Me Cuz You Ain’t Me!” Leah reached up, placing her fingers around the smooth plastic. She didn’t have any money, but she had to have this keychain, though she didn’t quite know why. She deposited the keychain into her jeans, and walked to Melissa, they walked out to Melissa’s mom’s car. When they got to Melissa’s house, and they climbed up the stairs to her bedroom, Leah dangled the keychain on her finger. “Look what I got!” she said, a thrill in her voice. “Hmm, nice I didn’t see you at the other check out.” Melissa said. Then, Melissa realized, Leah hadn’t checked out, just walked out. “You Stole It!!!” Melissa’s voice quavered. “Shh! Yes, but Melissa, it only cost a dollar, it’s not like I stole a hat, or a pair of sunglasses.” She said. “If it was only a dollar, I could have bought it for you.” Melissa replied. Chances are neither of the girls would have thought that Leah was going to be swiping hats and sunglasses, and even worse in only a matter of weeks.

Leah was alone the day she had her first close call. She had stolen a gel pen, a purple gel pen. She walked out the door, and a beeping alarm went off. “Ma’am we’re going to need you to empty your pockets.” Said the security guard. “Oh, I must have totally forgotten, my friend, she’s sick, and I was just going to bring her a little something to cheer her up, her favorite color is purple, let me go pay for this now.” Leah said quickly. But Leah didn’t pay for it she just snuck out the side door where there were no security measures.
A few weeks passed, Leah and Melissa were window shopping at the mall. Melissa had wanted to go to the park, it would be far more difficult for Leah to find something to steal there, but Leah had insisted on the mall. They went into Leah’s favorite store. It sold cute accessories, but was expensive. Melissa was looking at a bracelet, facing the other direction, when Leah slipped a pair of blue, butterfly shaped earrings into her pocket. Leah and Melissa were walking out the store, Melissa having decided she could get almost the same bracelet, cheaper at a department store, when an alarm rattled the doorway. A police officer walked up to them. “Ladies, turn around, we have to handcuff you, and take you down to the cell, until your parents get here.” Leah let out a quiet shriek. “I won’t ever do it again, I swear, I just, I just…..” Leah was sobbing. Melissa looked into Leah’s eyes she could see that Leah was telling the truth. Melissa was calm, she spoke up. “Officer, we’ll come with you, you can call my mom, Leah’s parents don’t really pay her much attention, my mom is kind of both our moms in a way. If you take off the handcuffs for a moment, I’ll get my wallet out of my pocket, and pay for the earrings. I’m sorry for the disturbance.” The officer agreed, Melissa paid for the earrings and they went down to the mall’s security office. Melissa called her mom, and explained every thing. That night, Leah got a phone call from her parents. They had given her up for adoption…just like that. They didn’t even want to see her long enough to say good-bye. It had been set up with the social workers that Melissa’s mom and dad would become her legal parents within a year. They said that they’d be gone for a couple hours the next day and she could go to the house then and get her stuff. She should leave the key on the kitchen table and lock the door on her way out. Leah knew that some kids would cry, but Leah just hugged Melissa, and Melissa’s parents, their parents, she had always felt more at home here. That day, had been the last day, Leah had ever stolen something. 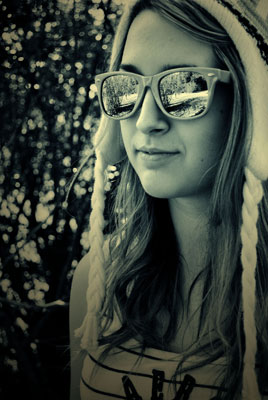