A Day in the Life of the Tower of London

Okay, so being a historic landmark, especially one where royal monarchs were once imprisoned, sounds like a pretty neat thing, right? Ha! Wrong! Do you think I’ve enjoyed hearing those screams? Please. Just standing there with nothing to do while some grisly act is performed inside me is probably one of worse feelings I’ve had in my life. And although some good things have resided within my walls, such as royal menageries, mints, and the crown jewels, holding prisoners was my first memory, and unfortunately, the strongest one I have. Apart from that, well, you know. I’m a fortress. With towers, moats, and walls. Really, not much of a life.

Today, I am especially tired. It is taxing work, being The Tower. Apart from holding in all those horrible memories, I must always be alert and on the lookout for would be vandalizers and most importantly, thieves. The crown jewels are priceless, not only in my opinion. And yesterday was my birthday, so loads of people were here. There were at least twenty that I rated as “about to pounce.” My stones are almost all grey and crumbling anyway, but I swear that a few more turned the color of sour milk after days end.

I thoroughly want to let down my guard for just a couple of minutes, but it’d probably be too risky. The Beefeaters (old retired blokes from the British Army who guard the tower) think the safety of the crown jewels lie completely in their hands. In reality, it’s all me. If I wanted to – though I never would, such things are beneath me – I could purposely give away the jewels. Once I relax and let go of my hold on this whole place, every case and locked door will pop right open. So you see, it wouldn’t be a good idea.

However… I could possibly rest just a small part of myself at a time. Hmm…

I focus on the Jewel House, where the crown jewels are kept. (Obviously). As this is the place I protect the most, this is where I wear out the easiest. If such a combination of towers and forts like myself could get headaches, this would be mine.

No one is about, except a couple of Beefeaters milling about aimlessly outside the front. But this doesn’t really matter anyway, because the jewels are inside, not out. I focus on the interior, and… it’s empty! Thank God. I look around one last time, and then slowly, carefully, I ease my control over the encased jewels and crowns. Locks undo, lids flip open. Ahh… such relief.

But wait. What is that over by the door? A flicker of cloth. The picture of a red crown emblazoned on the front of a black shirt. A Beefeater. Panic rises in me and I snap everything shut. But the damage is done. The look I saw on his face was one of utter shock mixed with greed. He must’ve seen. Calm down, I tell myself. He’ll probably just think he imagined it, and if he doesn’t and tells someone, they won’t believe him anyway. The Beefeater looks around once more and leaves, and I spread myself out over the grounds. But before I go, I suddenly remember what that one’s name is: George.

He’s been acting rather odd lately. George, I mean. Later this morning, after I stood by disgustedly as an old lady leaned against me and barked at her grandchildren, I saw him sneaking off somewhere. He looked around shiftily, and then just kind of melted into the crowd. Unluckily, he hadn’t escaped within my walls, so I wasn’t able to watch his every step. But, I am most definitely going to have to keep an eye on that one.

The ravens have also been acting weird. Usually they just flap and caw, and caw and flap, which is an annoyance in itself. Lately though, they’ve been ticking me off even more. And I don’t just say that because of all the extra white blobs they’ve been directing at me. They’re up to something, George and the ravens.

Groups of people pass in front of me. One of them looks strangely familiar… George! Although he’s not in his Beefeater attire! What is going on here? He can’t be off work yet, because I know each Beefeater’s schedule like I know every name ever scratched inside one of my towers by some poor, desperate prisoner. He must have gone somewhere and changed his clothes, but how come the other Beefeater’s didn’t notice?


I know how. It’s really quite easy. Today’s an especially busy day, and all the Beefeaters are either off guarding the crown jewels, or leading tours. George could have slipped away before any noticed as easy as pie. But what is he doing?

Then, it all becomes clear. The crown jewels! He’s after them! That explained everything! The sneaky behavior, the way he snapped whenever someone got too close, the way his eyes widened with greed when he saw the jewels
uncovered … Oh yes, he’s probably slinking off right now to consider the incident this morning and how he can put it to his advantage. Blimey. The jewels have been stolen before, but it’s never been my fault. If he succeeds in his plan… but that’s rubbish, of course. The rest of the Beefeaters take their job seriously (unless some of them are in on his plan), and I, for one, am never letting down my guard again.

It’s been several hours, and George isn’t back for his evening watch. The other Beefeaters are beginning to get suspicious, as am I. I wonder if he’s planning to “do” anything tonight. You know what I mean, strike. If he is, though, I’m prepared. I wish I could communicate with the Beefeaters, so I could warn them. Unfortunately, however, I don’t have that special power.

Oh no! There he is! He’s strolling casually towards me and the guards with I black bag over his shoulder. I believe he’s even whistling! Oh, the nerve of him! Well, I suppose it’s time to stop hiding.

The big front gate is open. Using all my will power, I bring the two sides together with a heavy clang! The Beefeaters already on duty look taken aback. George’s face is just one lump of fear.

Ha Ha! I think. That’ll teach him. Because I’ll tell you what, O’ Mister Thief, if you even think of laying one of your rotten, greasy fingers on my jewels, you’d better think again, because I will stop you in whatever way possible, even if it means pulling out each and every one of my stones and crashing down on myself. 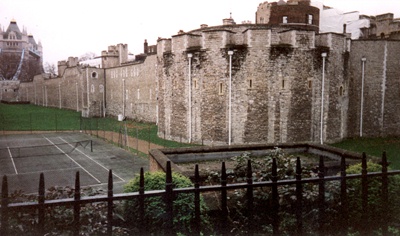 View profile
Hilarious! Adding it to my favourites list!