An Address from President Linus

[November 1st, 9:37 A.M., EST] President Linus addresses the general public about an altercation he had the previous night:

“Fellow Americans… I come here to speak to you in rough shape this morning. I had an altercation with a man last night at approximately 10:47 P.M. with a rather disgruntled citizen. I have an explanation of the events that transpired, which I will share with you now.

“Many of you, I’m sure, are questioning why there were no Secret Service agents present. Surely, this kind of attack could have been prevented with their presence. However, I was able to sneak around the agents, and I was allowed my own time for one of my favorite traditions.

“I sat in a pumpkin patch just outside the capital of this great nation. I make a habit of doing this tradition every year. To this day, I have seen the Great Pumpkin once, as a young child.

“Little I knew, I would see a… Great Pumpkin.

“I heard heavy footsteps behind me; when I turned to investigate, I saw a man sprinting at me full speed. He wore nothing but a giant hollowed out pumpkin around his body with the stem as a hat. I had brought several very strong lanterns with me, so I could see in the darkness. I saw his eyes were bloodshot; I believed him to be intoxicated, or under the influence.

“As he got closer, he shouted, ‘I’m the Great Pumpkin!’ along with strings of profanities that ought not to be said on television, as I appear to many of you at home.

“I jumped out of my lawn chair and attempted to sprint away as fast as I could, but the years haven’t been particularly kind to me. I tripped, landing face-first into a rotting pumpkin. The man caught up behind me. As I wiped chunks of pumpkin from my face, I saw the rogue remove a carton of eggs and a can of whipped cream from the cavity. He emptied the carton onto my face, one by one, and topped me with shaving cream, like a… pumpkin pie.

“All the while, this absolutely strange man laughs and hollers.

“It was at this point that the Secret Services, thank god, realized I was missing and figured out where I was. Their vehicles approached, and my attacker looked up. He yelped and ran away, but not before I received an unwarranted sock in the face. He leapt up, and scattered away on all fours, like a possum. I was quickly assessed and -despite being banged up- determined to be ok.

“Our perpetrator is still at large. If anyone has any information on this man, please contact local authorities. I will be speaking about this issue no further.”

[President Linus steps down from the podium.] 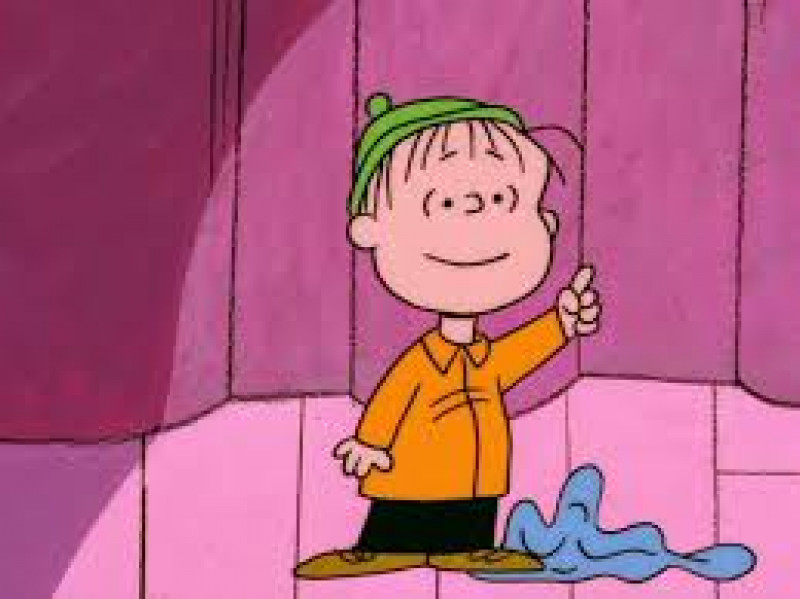 Our Composition class makes us do Quick-Writes before we start calss, for about 10 minutes. for our class final we had to choose one to refine and revise and then post. this is my entry, about Linus from the Peanuts cartoons.

Favorite Quote:
"I reject your reality and substitute me own!"