There once was a boy, and he was Nothing. And his name was spelled just like that: N-O-T-H-I-N-G. He was not an adult, not a kid, not quite even a teen. Just Nothing. He didn’t play soccer with the boys at school or run and try to kiss the girls; he didn’t play chess with the nerds. Day after day he was alone, and he talked to the trees.

“Why are you so tall?” he said, and the trees said nothing, just swayed their arms in the breeze and waggled their fingers and he imagined they were saying, “We don’t know. We don’t know.”

After school every day, Nothing walked to the little white house with green shutters, the one he called home. This was his favorite time of day, when the sun was still up and Grandma was still awake to bake him cookies and tell him stories and ask, “How was your day, Charles?” He was Charles to Grandma. For two hours in the afternoon he was Charles. He would always respond, “Nothing happened.” He was waiting for the day when something did happen, something he could run home to tell Grandma about. But he was still waiting.

He heard them whispering when they thought he was asleep. Worthless, Worthless. We wish he’d never been born.

But one day, Nothing came home from school, ready to become Charles. Instead, he found no one but an angry red and blue truck, lights flashing. After that, there was no more Grandma. There was no more Charles.

Worthless had a fit that night. The worst of his fits. They’d never seen him like this. He broke a vase and a stack of dishes. He couldn’t see. He saw bright lights in his eyes, flashing, flashing, and they made him angry. He was screaming, screaming so loud he couldn’t hear himself anymore.

Nothing didn’t go to school for a long, long time after that. So long that even the teachers noticed he was missing. Nothing was gone so long, they wondered if he’d ever be back.

And then there he was, standing on the playground one day. He’d grown a little taller, and his hair was a little nicer, and he was wearing a nice red and blue striped polo tucked into his dress pants. And they thought maybe he’d be different now. And he was. He was different, and he was slowly becoming Charles to the kids at school.

But he realized things now. He ­noticed the looks he got. He noticed how when they saw him coming, their voices drifted away and they averted their eyes, awkwardly shuffling their feet. He noticed how when the kids playing four-square saw him approach, they’d pick up their ball and leave. He noticed that the trees were his only friends. “Why are people like that?” he asked them, and they waggled their fingers and shook their arms and said, “We don’t know. We don’t know.” 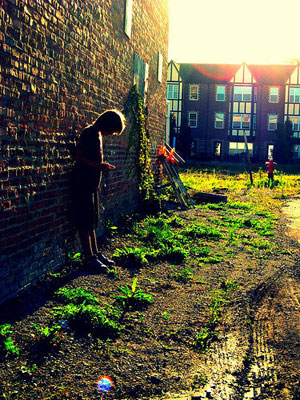 This article has 17 comments.

View profile
This is really great.  i read the  feedback section and it mentions this story.  it really is that good.  The well written emotion is very refreshing right now.
Jolvin SILVER said...
on Oct. 23 2010 at 12:02 am
Jolvin SILVER, Houston, Texas
6 articles 6 photos 4 comments

Favorite Quote:
"There are two ways of spreading light; to be the candle or mirror that reflects it." - Edith Wharton

View profile
I was working in the library one morning and saw a "Teen Ink" magazine, I happened to flipped to the last page and saw your article. The moment i read the first sentences in your story, i was amazed, glued tight until the end. i was left speechless and your story kept me thinking all day. Let me just say, I love this short story you wrote and hope you write more!!
IamtheshyStargirl PLATINUM said...
on Oct. 16 2010 at 2:36 pm
IamtheshyStargirl PLATINUM, Lothlorien, Utah
44 articles 16 photos 2206 comments

This is beautiful, and you are a vastly talented writer.

Thank you for sharing your gift with us :)

View profile
Wow, I read tis is the magazine, and it was fantastic. I wish I could write like that. Amazing!
HelyRose BRONZE said...
on Aug. 2 2010 at 6:12 pm
HelyRose BRONZE, London, Other
2 articles 0 photos 7 comments
View profile
This is a brilliant piece .Great view on things , you really captured an emotition felt there. Amazing.congrats on being put in magazine.
acousticgurl SILVER said...
on Jul. 28 2010 at 2:26 pm
acousticgurl SILVER, Lagos, Other
6 articles 0 photos 19 comments

Favorite Quote:
Shoot 4 d moon. Even if u miss, u will land among the stars. Rock Out!

Favorite Quote:
We're all just looking for attention, to be discovered overnight. We're all frustrated by the popular ones that claim the limelight before they fall to pieces. So many of us are stuck under the radar--what makes me different? You decide!

Hey Gymbabe, some of my stuff FINALLY got put up.

I'll strike you a deal. I'll read/comment/rate some of your stuff, but only if you check out mine too!

Yeah, it takes a long time, just be patient(I know, that's, like, impossible).  This piece was awesome, though.  I loved it.

Btw, will you guys check out and comment on my work?

Wow, This is incredible. What does Charles have? I'm ready ready ready for Charles to find the good kids in the world. He needs an adventure real bad. He needs you to help him.

Well, thats what I feel anyways.

How long did it take the people to read your article and post it online? I submitted many different things, but it's takin' forever.

View profile
This may be one of my most favourite prose on the whole website. It is mind-boggingly awesome.
magic-esi PLATINUM said...
on Jun. 2 2010 at 3:53 pm
magic-esi PLATINUM, Hyde Park, New York
27 articles 0 photos 231 comments

I'm blown away. I didn't know people wrote like this anymore.

MayaElyashiv PLATINUM said...
on Jun. 1 2010 at 11:00 pm
MayaElyashiv PLATINUM, Ramat Hasharon, Other
37 articles 4 photos 193 comments
View profile
Wow...honestly, I was a little skeptical after reading the first two lines. But boy, was I wrong. This is one of the best pieces I've read on TeenInk. Amazing.
Mary-Fairy01 GOLD said...
on Jun. 1 2010 at 7:24 pm
Mary-Fairy01 GOLD, South Portland, Maine
10 articles 0 photos 5 comments

Favorite Quote:
Silly things do cease to be silly if they are done by sensible people in an impudent way. ~Emma by Jane Austen

View profile
I honestly have tears in my eyes right now. The prose is wonderful...sniffniff...