Amon awoke to the sound of an owl, screeching as it dived toward its next meal. After hearing a horrendous squealing from a piglet in the forest, Amon knew the owl had succeeded. He tried to go back to sleep, but he sensed something, or someone, was watching him. He grabbed a branch next to him and dipped it into the fire. Then he got up and circled the camp, swinging the branch around so he could see the area around him. He had camped out right on the edge of the forest. Noticing movement near the fire, he cautiously moved closer. There, rummaging in his backpack, stood a raccoon. Amon sighed, glad it was only a raccoon. Legend has it there are mythical monsters roaming the lands, some who are kind, others who will kill anyone in their way, and Amon didn’t want to meet the second kind. He chuckled and ran to the raccoon, making as much noise as possible, hoping it wouldn’t feel the need to defend itself. It scampered off a little, then looked back, an apple in its paws and a glare on its face. Then it was gone.
Amon sat back down near the fire, and stared at it. Not long after he started to doze off.
He awoke with a start, not knowing where he was. It was dark, which was strange, because if he fell asleep, it should be day by now. He looked around and noticed there were walls surrounding him, with only a small patch of sunlight to his left. His legs were cramped, so he stretched. He heard a satisfying pop and sighed. Now,he set on escaping his ‘prison’. He got on his hands and knees and crawled over to the spot of sunlight. He found it was only a small hole, and the walls surrounding him were made of rock. The hole was a little bigger than his fist, and he could squeeze it through. A noise behind him made him jump. He backed up against the wall, the hole with sun shining through near his head so he could see anything that would jump out at him. He waited. And waited. When nothing came out, he sighed. He was about to turn around to look outside of the hole when a blur of black and white jumped out at him. He tried to run, but instead got cornered. He fell to the floor and broke into hitched sobs.
“P-p-please don’t h-hurt me!” he cried. Time passed, and his sobs subsided. He didn’t dare look up.
“Get up,” a female voice ordered, but in a gentle, soft voice.
Amon looked up and let out a stifled scream. In front of him stood a wolf. It was black with strange white markings. It had disturbing electric blue eyes. He was afraid to talk, afraid it would attack at any movement or sound he made.
“Get up, I’m not going to hurt you. I promise.” Amon looked up, trying to find the source of the voice. When he saw nothing besides the wolf, he stared into its eyes, hoping he was wrong about who, or what, just ‘talked’ to him. “W-who are you?” he asked. The wolf tilted its head and walked forward and stood right in front of his face. “Are you what’s ‘talking’ to me?” he asked, already knowing the answer.
“Yes, and you need to get up. I know how to get out.” The wolf started to turn, but stopped. “I’ll explain everything when we get out of here.” It bounded to the other side of the ‘room’ and started digging. “I started this hole a week ago, and I am nearly finished. The wolf disappeared in the hole. Amon crawled over and almost had a heart attack. The hole led down to a tunnel. The wolf popped up and Amon almost fell in. “Well, are you coming? We don’t have much time. Amon nodded and the wolf ran down the tunnel. Amon jumped down and landed with a soft thud. He started running down the tunnel, the wolf nowhere in sight. He came to a stop at a dead end. He looked up and saw a piece of wood above him. He pushed it open and climbed out. The wolf was waiting for him. “We’re out!” he shouted. “Um, not for long,” the wolf’s voice echoed in his head. He turned around and found himself face-to-face with a cyclops. It’s single eye looked down at them and its mouth curled into a gruesome smile. “Looky here!” it boomed. Amon gulped. They were finished. 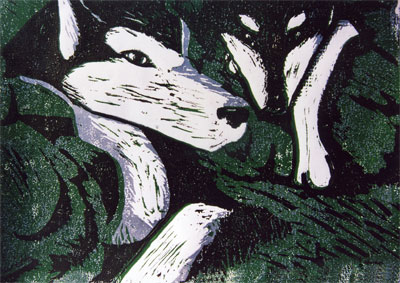 Favorite Quote:
"Eagles may soar among the clouds, but weasels don't get sucked into jet engines"