My head was spinning. My arms were flailing. My feet followed myknees in twisted turns. Two steps left. One step right. Or was it two? Turn around. Clap twice.Change partners. And again! On stage, a round redheaded man with freckles like mine wearing astarched white shirt, a tartan bow tie, and a kilt shouted in a thick Glaswegian accent,“Swing yehr pahrtner ’roond and ’roond.” We were stomping through theDashing White Sergeant at the Saturday ceilidh on the Isle of Iona.

In Scotland, young andold gather to celebrate the hearty tradition of the ceilidh, where they dance, play music, readpoetry, tell stories, eat shortbread, and sometimes sip a bit of whiskey from a tiny silver flask.It didn’t seem to matter that we didn’t know any of the villagers, I felt as welcome asI ever had. The wail of bagpipes shook the floor, and even the windows seemed to dance. The bandplayed a Strip the Willow, and we formed two lines facing each other, twirling each laughing dancerup and down the line. The music stopped with one triumphant fiddle bow and the stomping slowed to ashuffle. Old men cheered while women straightened their hair and fixed their skirts. Several cameto say good-bye and shook our hands. We bade farewell to our new friends and reluctantly headed forthe door.

Outside, the cold air felt fresh against my sweaty cheeks. Nicoletta came andwalked beside me, offering her scarf. The full moon guided us down the narrow village road pavedwith pebbles and spotted with tufts of sheep wool. Our hostel was on the other side of the islandwhere the waves gently brushed the white sand beach that seemed to stretch for days. As we made ourway, women walking arm in arm, I heard new but strangely familiar songs from faraway lands.Nicoletta sang a Romanian song and turned to me with her big green eyes and said, “Teiubesc” (I love you).

As I lay awake that last night on Iona, I was exhaustedfrom our day of trekking around the island, swimming in brisk waters, and dancing into the night. Ihad spent the past two weeks in Scotland with 20 women from Eastern European countries. Lying on myfluffy white duvet, I thought back to my arrival after travelling 36 hours from Hawaii. My aunt Zoand

I arrived at Gillis College in Edinburgh, where we joined the others and listened to atall, slender woman holding a large board that introduced her as Nevenka from Serbia. Nevenka gavea presentation about the project she wanted to set up in her community to help single parents.Other women asked questions, offered suggestions, and praised her innovative ideas. As I looked attheir faces that first day, I began to understand what the Lydia Project was all about.

TheLydia Project was established in 1995 to empower women from former Soviet countries as theystruggled with changing political, social and economic circumstances and sought to help those whowere most marginalized in their communities. Since then, the Lydia Project had helped almost 200women turn their ideas into reality as they created charitable projects. My aunt and her Scottishgodmother ran the first program in Prague, and it has been expanding ever since. Some of theofferings include teaching English, grant writing, computer training, community outreach,international law, and project management. As English Director and Artistic Director, Zo helpsguide the women as they share their experiences and discover commonalities in their lives throughyoga, dance, role play, art activities, group and partner exercises, roundtable discussions, andcreative interaction.

Through the ever-increasing network of women working to providesupport for orphans, street children, elderly, refugees, persons with HIV/ AIDS, and victims ofviolence, trafficking, or disasters such as Chernobyl or the war in Kosovo, the Lydia Project linksgroups and individuals, offers guidance and instruction, and helps obtain funding from outsidecountries and donors.

Zo’s work with the Project had inspired me for years, so Iwas delighted when she invited me to come as an assistant. I wasn’t sure how I would help,but I soon discovered that I had both a lot to offer and a lot to learn. After meeting the womenfrom Serbia, Romania, Bulgaria, Ukraine, Moldova, Belarus, Lithuania, Georgia and Russia, alongwith helpers from Scotland, I quickly learned their names as we walked past stonewalls and redphone booths toward the university where we worked to prepare project proposals.

Participants had visited projects in Scotland and were refining their own proposals. Zoexplained that the women must describe their situations and justify the need for funding in theircommunities. Lilia needed statistics on orphans in Bulgaria to strengthen her proposal; Tamaraneeded facts about violence against women in Moldova, and Marina needed HIV/AIDS rates in Georgia.

I quickly became the designated Internet expert and gathered information from websiteslinked to the United Nations, the World Health Organization, and other groups. I then helped withvocabulary, formatting, and making cups of Earl Grey tea. I offered my Harry Potter novel to Keti,who was setting up a children’s library in Georgia. I like to imagine the young boy or girlwho’s reading my book right now. I watched the women’s bodies sway to my favorite CDs,and sipped hot chocolate with them as we gazed at the sea, talking about our lives, how much therewas left to do to make the world a better place, and how lucky we all were to be together, even ifjust for a brief moment.

That last night, walking home from the ceilidh down the wet grassypath, we sang their favorite song from my collection, “Follow me and everything will bealright, I’ll be the one to tuck you in at night.” As I sang with these women, sobeautiful, so strong, so willing to persevere in spite of tremendous challenges, I realized that Itoo had a path to follow. I wanted to pursue a profession that would help those in need, offeringalternatives and promoting justice. Attending your college, with its emphasis on community serviceand social justice, would serve as a vital step toward fulfilling my personal mission whilecarrying on the long tradition of the school. 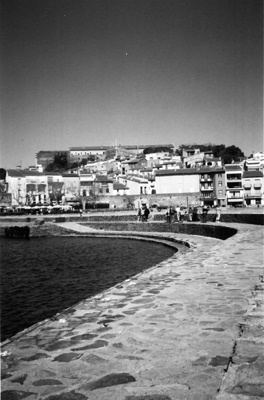