If you're like me at all, you're an avid music fan who's sick of mainstream rock, infested to the core of singers with whiny voices and sex-fueled lyrics. After a while, the message and the sounds, the beats and the bands, seem to get a little repetitive. The popular rock that invades the airwaves triggered me to search out bands like The Strokes, The Hold Steady and The Arctic Monkeys. And when I find a diamond in the rough, any band who's strayed from the beaten path, I tend to take their music and run with it. In September of 2007, I had the opportunity to see The Starting Line in concert. I had been impressed enough at Warped Tour to see them again, but I left that night with a new favorite band, one most haven't heard of. Emerging from the city of Worcester, Massachusetts is “Four Year Strong,” a self-proclaimed Happy-Hardcore band.

If you love rock 'n' roll, but are a little apprehensive to the booming hardcore/screamo genre, you'll want to ease your way in by listening to Four Year Strong. They don't growl and scream in various pitches, and they're music isn't as scary as bands like Underoath and Atreyu. Though they stay far from the death metal scene, these New England boys know how to get the mosh pits moving all across the country. Of all the bands I've seen, ranging from Angels and Airwaves to Papa Roach to Rush to Vanna, this band, I believe, puts on the best show and covets the liveliest fan base.

Since September, I have had the pleasure to see Four Year Strong three times. I have crowd surfed to them, moshed, and screamed until I thought my lungs would collapse. Each time I see them I leave with bruises, dislocated shoulders and knees to the head, but I can honestly say it's worth it. I've tried having just as much fun during other bands, like Armor For Sleep, but there's just something about these Worcester boys that gets my heart thumping. They're the one band I have always been too busy having fun to actually watch them, so after two concerts, I still had no idea what the members looked like.

I'm not the biggest hardcore fan, admittedly, but no one needs to be to fall in love with this band. The booming drums and catchy make-you-feel-like-you're-truly-alive lyrics are enough to convert even the pickiest of punks and metal heads.

Four Year Strong's newest CD “Rise or Die Trying” is a perfect 11-track combination of fist-pumping, foot-stomping music. Go ahead and turn up the volume so the whole house shakes, you know you want to. The CD starts with “The Take Over” which begins with bells, sirens, intense drums and a guitar, getting the audience truly pumped up. It flows perfectly into the next song “Prepare to be Digitally Manipulated.” During the concerts, Four Year Strong plays these songs first. Thirty seconds into the second song, I guarantee you the floor will be moving and people will be jumping on one another, surfing over their heads.

While Rise or Die Trying is by far my favorite of all my CDs, I cannot speak enough for the show this band can put on. Test your survival skills in the pits, and after a few minutes, even the shyest of kids will be comfortable with crowd surfing over the heads of strangers. The music is so loud, it rattles any and every hollow space, making the lungs vibrate in your chest. During songs like “Maniac (R.O.D.)” the whole crowd feels alive, screaming out lyrics like “Here at the top of the world/I've always heard that the good die young/this little town must have proved them wrong.”

I consider it a sin to listen to their CD and NOT see them live. Four Year Strong knows exactly how to move their crowd, and they love their fans. They gain more and more with each show, and I believe it's only a matter of time before we start hearing “Heroes Get Remembered, Legends Never Die” on the radio.

They put on the most phenomenal shows. Mirrored by 311 and Angels and Airwaves, but on the opposite end of the spectrum. Yes, they are that amazing. Trust me. I wouldn't put my life on the line, willingly, at every concert if I didn't believe it. Four Year Strong is going to revolutionize contemporary rock music as we know it. So, if you're an avid music fan like I am, you'll benefit from a band like Four Year Strong. And if you're still addicted to the mainstream, hopefully you'll still take the time to check out this emerging band and get a somewhat glimpse into the future. 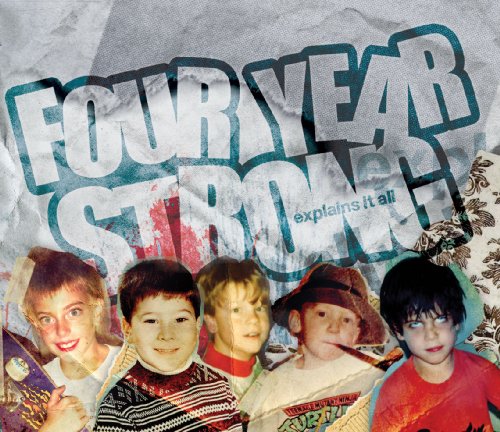 View profile
You like Four Year Strong? That's my favorite band of all time! You have a good sense of music