Circa Survive - On Letting Go


Circa Survive's second release On Letting Go is definitely not a sophomore slump. This album is just as amazing as their first, and it definitely shows the band's growth. The cover art for the album was once again done by Esao Andrews, who has done all of the band's album covers in the past. The illustration on the cover is beautiful, and the artwork on the inside is simply breath-taking. This album is definitely one that should be bought, instead of downloaded.

Although the band maintains its experimental style, the lyrics on On Letting Go explore an even wider range of issues. In the song Kicking Your Crosses Down, Circa Survive's singer, Anthony Green, questions the existence of God. He sings, “I fixed myself up nice, but you never came.” All throughout the album Green sings of his doubts in religion, and the how he struggled to find a connection.

The album's title, On Letting Go, is very fitting. It shows the bands maturity, and especially Green's personal growth. It is also a great title, because fans can relate to it. Everyone has to let go of something at some point, and this album explores the things everyone experiences while letting go.

Not only does Circa Survive have amazing lyrics, but they have awe-inspiring music. The sounds of the two distorted guitars blend in together perfectly, and they weave in and out of each other to create a unique, experiment sound, which defines Circa Survive. The sounds of the marvelous guitars merge together with Green's unique vocals to create the perfect songs. Green is known for his bizarre, high-pitched voice, and he is often criticized for it. His high-pitched voice is faultless, and it works so well with the band's experimental sound. When one first listens to a Circa Survive song, it sounds messy, and strange, but in reality each of their songs are highly organized, and well crafted. All the members of the band obviously have the same visions of how their songs should sound, and each member plays his part to contribute to the band's overall sound. When the members of the band come together they work well to create a perfect blend of guitar, bass, drum, and vocals.

The album opens with a powerful song, Living Together, which starts with a guitar line that immediately grabs the listener and pulls him or her in. Then the music slows, and Green begins to sing, “It starts out like a season in reverse.” As a listener, you can feel the passion in Green's voice as he sings the chorus, “He makes it up as it goes and it goes away.” This song, like most of Circa Survive's songs, tells a story.

The second song on the album, In The Morning and Amazing, is a perfect example of how the band members of Circa Survive work together with their different instruments. Again, this song begins with a catchy guitar line, which dies down to let Green sing the chorus.

One of the most notable songs on the album, is the one for which the album is named after, On Letting Go. This song is beautiful, and the lyrics are spectacular. The song starts with an eerie guitar line, and from there the song moves slowly and steadily. The song moves at that pace, until the end, when the drum line becomes a powerful, and steady pounding, and the guitars speed up, and become louder. At this time Green begins to sing the captivating line, “If blood is thicker than water, then you'll drown quicker than we intended, and you'll know where you can find us in the end.” From there the song slows down again, and slowly comes to an end.

On Letting Go is a spectacular album, but it is not for everyone. The experimental sound and strange lyrics of Circa Survive are not appreciated by all. The album is a must have for fans of The Mars Volta, The Sound of Animals Fighting, and The Receiving End of Sirens. 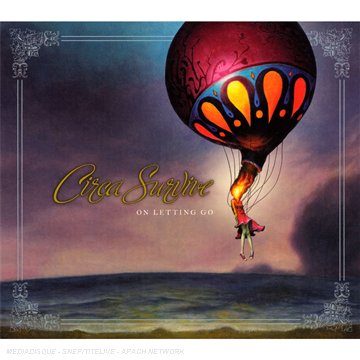