Blink-182 frontman Tom DeLonge is back with the third effort from his U2 influenced “space punk” group, Angels & Airwaves. The new album, LOVE, was given away for free on their website on February 14th, 2010 in order to coincide with Valentine’s Day. On the whole, the album is a work of art like nothing the band has put forth to date. The songs are powerful; the sound is fine-tuned, and the album has a cohesive message. LOVE measures up as a huge improvement over the band’s previous sophomore slump, I-Empire.

The opening track, Et Ducit Mundum Per Luce, shows a return to the band’s penchant for drawn-out instrumental lead ins. The piece is captivating enough to hold listeners’ attention for the roughly two and a half minutes it lasts, gradually building as more instruments begin playing and expanding their parts. The track sets the tone for the record, which as DeLonge explained in interviews is based on the concept of a lone astronaut looking down on the Earth from space and watching the world end.

When Et Ducit fades out and The Flight of Apollo begins with a few subtle notes, listeners are invited to wait for what AVA has in store. When DeLonge’s distorted voice comes floating in, he begins recounting Et Ducit and setting the tone for the record. Once again, the listener can feel it building. Then the guitar riff kicks in, and it’s more powerful than any riff on a previous AVA album. The Blink-182 punk roots are back, and DeLonge’s following verse recalls various Box Car Racer and Blink-182 rhythms. The chorus, in signature Angels & Airwaves style, is uplifting and suggests that the beautiful parts of life should overpower the darker parts. Flight of Apollo is one of the strongest songs on the record, and the combination of powerful guitar riffs and catchy hooks keep the momentum going into the next track.

Flight rolls right into the curiously named Young London, the third track on LOVE. The guitar-filled intro is reminiscent of AC/DC, and when the verse kicks in, it has become clear this isn’t the same Angels & Airwaves that released I-Empire. The self-reflecting lyrics of Young London express a desire to make amends for past wrongs and live life to the fullest. “Suit up boys, let’s ride, it’s the weekend,” croons DeLonge in the most upbeat and catchy chorus on the album. The steady drumming keeps the track propelled, and when it begins to lose steam the chorus is dropped in favor of a verse sampling the background vocals that let the track end gracefully, leading into a one minute intro to the next track.

Shove has the benefit of a short intro, excluding the full minute attached to the end of Young London. The track slightly slower track becomes the album’s first ballad, and DeLonge’s lyrics accurately depict a young couple stumbling upon true love. Once again covering subject matter such as righting wrongs and reconnecting with lost loved ones, the songs marks a streak unlike any previous Angels & Airwaves album—keep the infectious excitement and momentum going all the way to the fifth track.


Unfortunately, Epic Holiday shows a bit lackluster side of the album. After the minute long lead in at the end of Shove which features various inspirational lines said by a distorted female voice, Epic Holiday opens with a guitar riff eerily similar to the band’s previous hit single, Everything’s Magic. DeLonge’s verses on Epic Holiday really shine, describing humanity and its flaws and miracles alike. The chorus, “Let’s start a riot/nobody’s right/nobody’s wrong…” falls flat in comparison. The song continues to supply evidence of a more mature AVA that has finally figured out what it is they’ve been trying to inspire all these years, but after the three previous tracks, Epic Holiday just feels out of place.

The next track, Hallucinations, was also the band’s lead single for LOVE, and with good reason. Hallucinations is as close to the Blink-182 sound that Tom DeLonge gets on this album, though he does come close in other places and it is certainly evident when compared to previous AVA efforts that the Blink-182 reunion has had its effect on the sound. When the song kicks in around a minute in, the listener is instantly hooked; DeLonge really does have that spark back. When the verses begin and his voice is far less distant, followed by the addition of an incredibly upbeat and catchy chorus that sounds like it could have been from a Box Car Racer track, it’s easy to see that Tom is finally comfortable embracing the sound that made him famous. The song certainly has its AVA moments, and it would still be a little out of place on a Blink-182 album instead of an Angels & Airwaves album, but it is a beautiful merger of two different sides to one artist.

The Moon Atomic (…Fragments and Fictions) opens up with a low key guitar intro, and the drums come in to pick things up. DeLonge’s slower, at time whispery singing perfects the start. The Moon Atomic brings us back to the idea of watching the apocalypse from orbit, and it becomes deathly clear that DeLonge is trying to apologize to someone and use his words of repent to offer inspiration to those who seek it. The Moon Atomic’s observational and at times politically conscious lyrics call to mind another previous single, Secret Crowds, but without being musically close enough to cause an issue. The Moon Atomic benefits from keeping its steady pace marching throughout the song rather than trying to become something it isn’t. At 6:17 total, the song actually ends at four minutes in, paving the way for a two minute extended intro to the next track.

Clever Love marks another quintessential love ballad, with DeLonge declaring that the aforementioned clever love “won’t tire…caught fire” in the simple chorus. The slow verses feel heartfelt, but they don’t mesh perfectly with the chorus. The addition of the second chorus “You are all that I want…You are all that I need…” would have worked better sprinkled throughout the song to take the build-up from the drums and guitar at the end of each verse and put it to work.

Soul Survivor (…2012) reminds the listener that despite the seemingly endless amount of uplifting thoughts and positive energy the band attempts to send, their protagonist has still witnessed the end of the world, and he is reeling to cope with the loss. The track opens with a few seconds of silence, uncharacteristic for an AVA track, before a decidedly techno instrumental piece begins, with DeLonge’s vocals come in with effects reminiscent of debut-era Angels & Airwaves. Strong guitar riffs and a constant change in style keeps the track pummeling along. The chorus is notably reminiscent of Blink-182 in style and delivery, with signature Angels & Airwaves lyrics.

Letters to God, Part II is the record’s penultimate track, a call back to one of the breakout songs from DeLonge’s Box Car Racer album. While thematically the two songs share some ideas and concepts, they don’t share much else. Continuing from where Soul Survivor left off, Letters to God, Part II shows the protagonist reevaluating his stance on life and religion, suggesting that everything we on Earth thought we understood was merely a façade, and what is truly going on is grand and extraordinary. Musically, Letters to God, Part II calls to mind Young London, and has a similar energy. It may not have been the direct sequel fans were hoping for, but it is a solid song nonetheless and one of the strongest on the record.

Some Origins of Fire closes the album on a less than satisfactory note, declaring “We all are love and love is hard…we’re hard to love”. The repetitive chorus hurts an otherwise average song, and it lacks the grandeur sense of epicness previous AVA album closers had. The opening guitar riff is powerful, and while DeLonge’s verses are catchier than the chorus, he isn’t covering anything that hadn’t been touched on in the earlier songs. The song feels like it would have fit less awkwardly earlier in the album, with one of the stronger tracks closing.

LOVE is not a perfect album, by any means. It has its flaws; a lack of diversity in content, a few songs that felt considerably weaker than the others, the extended intros at the ends of most of the tracks could be cut without losing any overall value. Again, it is not a perfect album. But for Angels & Airwaves, a considerably niche band that is about outer space imagery, globe-spanning metaphors, distorted guitars and uplifting lyrics, it is the closest thing to a masterpiece we will see.

SCORE: 7.9/10
BEST TRACKS: Flight of Apollo, Young London, Hallucinations, Letters to God Part II
PARTING WORDS: LOVE is the best work Angels & Airwaves has put out to date, without a doubt. Their sound has evolved and matured, without making drastic leaps in style. DeLonge is comfortable in his own skin, and the result is an inspiring, fun record. 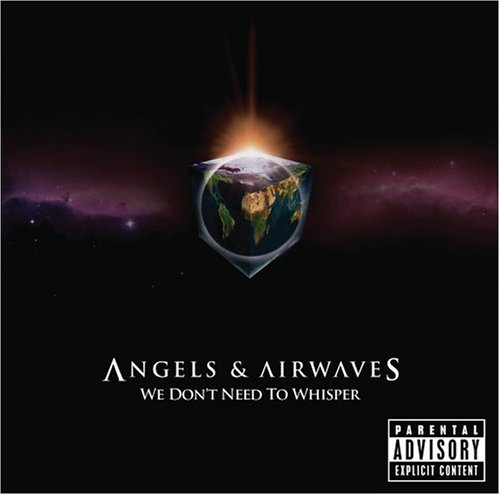 zoe101 said...
on Oct. 11 2010 at 6:48 pm
I think the writing of this article is such superb quality. It sounds like a seasoned author wrote this, not a teenager. It would put some Rolling Stone writers to shame. Thanks for the great information and entertaining reviews.