Fearless Platinum Edition by Taylor Swift is her “musical diary.” When you listen to each and every song, you know she’s legit. Not only do the beautiful ballads and rocking tunes display her exquisite voice, but they also showcase her inner-heroine. Maybe she hasn’t had the worst struggles in life ever, but she possesses a kind of courage that several modern artists don’t. Each individual song talks about a different situation in her life whether it’s about her fantasies and realities in high school like in Fifteen, or her ex-boyfriend trauma in Forever and Always, she has her heart on her sleeve.

In her previous self-titled album, she introduced her personality to her fans. Taylor sang about her obsession over burning her ex-boyfriends’ pictures in Picture to Burn and helping her friend over come insecurities in Tied Together With A Smile, but now Swift shows even more confidence.

The first track, Jump Then Fall, Taylor Swift talks about trust in relationships. “I’ll catch you, I’ll catch you,” she sings. Untouchable is more a ballad, where Swift is accompanied by the piano. This one talks about not being able to be with someone, but dreaming of them at night. The third track, Forever & Always (Piano Version) is very beautiful describing a traumatic breakup over the phone. On the other hand, in Come in With the Rain, she sings of forgiveness. Superstar is an acoustic that is extremely relevant to teenage girls. Swift wrote about being a fan of a notorious singer and just being an average teen who covets meeting him. The Other Side of the Door tells about what she really is anticipating after a feud: her beau “to stand outside her window, throwing pebbles screaming, ‘I’m in love with you…’ Fearless is a unique tune that I find amazing. It is about being with someone that even when you’re terrified, you find strength to do the impossible. The next song, Fifteen is a memoir of her first year of high school. It tells of the innocence of a freshman that will be naïve the first time they fall in love. Love Story is very notorious, and it tells the story of Romeo and Juliet, but in the end, the get married. This track is a fantasy of a “flawless” relationship. I found Hey Stephen to be similar to her prior album’s Stay Beautiful. Hey Stephen is about having a crush on someone who several other people have a crush on as well. I find the lyric “All those other girls, well they’re beautiful, but would they write a song for you?” relevant to my life, being [that I’m] a writer. White Horse is a beautiful ballad that discusses her encounter to make her conclude that not every relationship is a fairytale like in the movies. Next, comes You Belong with Me, an upbeat song about wanting someone that is unavailable, yet you know that you were made for each other. Breathe slows things down a bit, and includes Colbie Caillat. It talks about the struggle in letting go of an ex. Tell Me Why is a tune that talks about a boyfriend that thought he was superior to Taylor. You’re Not Sorry is a soft melody about her being done with someone’s continuous mistakes. The Way I Loved You tells the story of a hectic relationship that Swift compares to “a roller coaster kinda ride.” Forever & Always is more fierce that its Piano Version. The Best Day is touching and sugar-coated. It is dedicated to her mother and includes various ages where her mother has assisted and inspired her. It even includes her “excellent father whose strength is making” her “stronger” and her little brother who “God smiles on” and “inside and out, he’s better than” she “is.” It shows fans that even Taylor Swift, award-winning pop-country star values her family. The CD concludes with Change a fierce song about over-coming obstacles in a relationship.

When I was finished rocking out to this album for the first time, I read the booklet that came with the CD. After reading a heart-felt introduction written by Taylor, and the lyrics to all 19 tracks, I read the final page with the credits. The first sentence I read was amazingly inspiring. It consisted of Taylor Swift’s definition of Fearless, which was “having fears, having doubts. Lots of them. To me, Fearless is living in spite of those who scare you to death…” That right there tells you who Taylor Allison Swift is: an inspiration, a beautiful soul, a role model, a singer, a writer, and many more amazing titles. 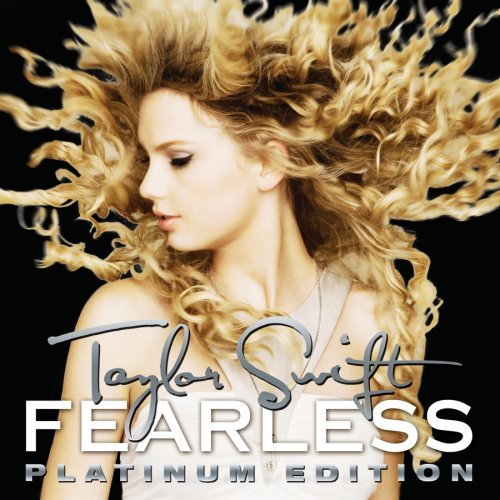 
Buy from Amazon Available on iTunes
The author's comments:
Taylor Swift inspires me, and I hope this piece inspires you.
Post a comment
Submit your own