Who I am by Nick Jonas and the Administration | Teen Ink

Who I am by Nick Jonas and the Administration

Here it is! the album that every Jonas Brothers fan has been waiting for. "Who I am," the debut album from Nick Jonas and the Administration. Nick starts off this highly anticipated album with the soulful "Rose Garden." Next is "Who I am." This is the chart topping hit that has a lighter feel to it than the song before, and has lyrics that share a wonderful message. "Olive & an Arrow" brings things down to a slower tempo and a very calming beat with very creative lyrics and a great guitar to boot. "Conspiracy Theory" takes things to a whole new, rockin' level. This song really shows off Nick's talents in the lyric department and how hard he can really rock out. With it's awesome old school, 1970's, rock feel, it'll definitely become one of your major favorites. "In the End" slows things down to make a very pretty ballad with wonderful, story-telling lyrics. "Last Time Around" picks up the tempo to make a very infectious beat with equally infectious lyrics. "Tonight" is the classic Jonas Brothers hit, but, this time, Nick decides to take this hit and slow it down a little to make a beautiful ballad that's just as likeable as the original. "State of Emergency" has a great beat, but the lyrics might be objective for some, which includes younger listeners and their parents. "Vesper's Goodbye" is a beautiful ballad with a wonderful piano that's the base for this song. "Stronger (Back on the Ground)" is a very inspirational song with wonderful lyrics and a heart grabbing, light feel which is a great way to end this wonderful album.

Bottom line: with his debut album, Nick creats his own, personal sound that's completely different from the JoBro's. Not to mention that Nick either wrote or co-wrote each and every song on this album! With the soulful beats and totally original lyrics that encompasses their songs, we'll be sure to see more from Nick Jonas and the Administration in the very, very near future. Enjoy! 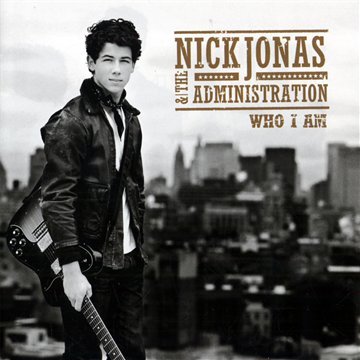 View profile
yay Nick!! xD hehe and nice review, very true..except Vesper's Goodbye makes me feel saddened, idk maybe thats just me lol.... and yep, i looove Conspiracy Theory!! so much! nd i love how Rose Garden's so deep...  and i totally agree with u on Stronger(feet back on the ground)!! i am very touched by that one :)