Imagine if you weren’t able to communicate well with others to meet your needs, and people gave you strange looks and walked away, if not, made fun of you. Then someone came and reached out to you, befriended you when people were cruel. In the movie “Radio,” the actors portray such a story.

This PG movie is set in Anderson, South Carolina and is based on a true story. Cuba Gooding Jr. plays the character of James Robert Kennedy, a mentally challenged man. James makes friends and “finds” himself with the help of the local football coach, Harold Jones, whose character is played by Ed Harris. The movie displays many examples of caring and kindness in such a cold world as James’. Many people either teased him, and others just ignored James. When Coach Jones reaches out to James and takes him under his wing, things start to brighten, though James’ mother (S. Epatha Merkerson) isn’t quite sure why Coach is doing all this. In fact, no one in town understands Jones’ reasoning.

James receives his nickname “Radio” because that is what he simply replies when Coach Jones asks what his name was. Another reason he is called that is because it’s rarely ever that James isn’t spotted without one of his own radios. Radio starts spending a lot of time at the T.L. Hanna High School, which is where he helps out Coach Jones with the football team, and later the basketball team. But some of the team members don’t agree with having Radio there. Johnny (Riley Smith) and his groupies decide it’s funny to make fun of Radio and trick him into doing naughty things just because he doesn’t know better.

Coach Jones stays by Radio’s side for many months, helping him along and defending him when others wrongly accused him. While some were harsh and unforgiving, Coach Jones protected and supported Radio. This movie is a great representation of friendship and love. Radio treated others better than many people wished they treated their neighbors just half the time. He made people feel special, and befriended everyone he met.

As the movie eventually reveals, the citizens of Anderson come to love Radio and accept him as their own. Radio influences the town’s population in a positive way that allowed them to celebrate their differences, rather than criticize them.

This spectacular movie had a perfect balance of humorous and serious moments, and it made me look at people differently than I had before. I’m sure many people would agree that “Radio” shows that you most certainly cannot judge books by their cover, and that you also can’t make fun of someone just because their different. With wonderful actors, a great plot, and a perfect happy ending, “Radio” is a flick you won’t want to miss! I definitely give this film 4 out of 4 stars. 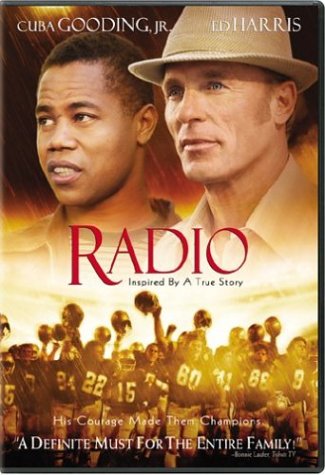