The first images we see are harrowing ones: Heavy rain beats down upon a battlefield, turning dirt mounds into thick pits of mud. Two armies, one in blue coats and the other in brown, have abandoned their rifles and are now engaged in brutal fistfights.

Then we meet Abraham Lincoln, the man himself. There’s no grand entrance, no swell of heroic music, no clever gags. Just a man sitting, chatting, and laughing with his soldiers. What a portrait of the 16th President.

Lincoln, directed by Steven Spielberg and based in part on the book Team of Rivals by Doris Kearns Goodwin, follows Abraham Lincoln (Daniel Day-Lewis) through the final four months of his life as he struggles to pass the Thirteen Amendment with the help of congressional abolitionist Thaddeus Stevens (Tommy Lee Jones), Secretary of State William Seward (David Stratharin), and his mentally distraught wife Mary (Sally Field).

Day-Lewis should be writing his Oscar acceptance speech by now. Everything from Lincoln’s tired gait to the thin voice seems effortless and genuine. He is tall and powerful, yet composed and elegant, with scratchy black and prematurely-gray hair, a mole on the right side of his mouth, and a mischievous grin that unconsciously blooms when he’s trying to win someone over by telling a humorous story (which is often). Even in the silence, his mere gaze speaks volumes better than a majority of actors nowadays. Never before has an actor fallen so in love with the figure he’s portraying.

While this film is a biographical drama, it is by no means a dusty history lesson. Every scene is impressive and breath-taking, and you don’t even realize how much you’re learning. When a young soldier recants the Gettysburg Address, the experience becomes more real than ever. When Lincoln slams his hand on a table and bellows at his cabinet, you are witnessing the inception of the modern presidency. The film is stuffed with Honest Abe’s infamous quips and mantras that will leave you cracking up or nodding. Or both.

Spielberg, director of such classics as Saving Private Ryan and Raiders of the Lost Ark, has again proven why his name has become synonymous with Hollywood brilliance. No detail in this story has been overlooked or censored. Spielberg deftly depicts both Lincoln the icon and Lincoln the human; while the President was a champion of civil rights and the cornerstone of American insight, he also twists votes and tells fart jokes. Spielberg spent twelve years researching the film, and his efforts are evident. He recreated Lincoln's Executive Mansion office precisely, with the same wallpaper and books Lincoln used. The ticking of Lincoln's watch is the sound of the real thing, which was recorded in its home at the Lincoln Presidential Library.

Lincoln brilliantly places its viewers in a time machine and shows them history that really matters. You leave the theater wanting to do research of your own. Imagine sitting and talking with such a wise man as Abraham Lincoln. Who wouldn’t want to? 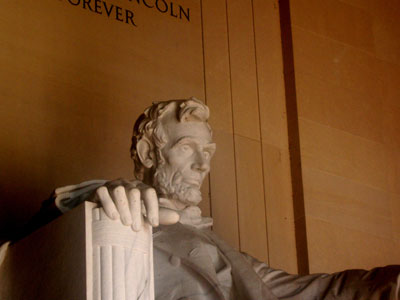