Snow White and the Huntsman MAG

When I saw the trailer for “Snow White and the Huntsman,” I was intrigued. The film struck me as action-packed, dangerous, dramatic, and exciting. I was curious to know how this remake would differ from Disney's 1937 “Snow White and the Seven Dwarfs.” Kristen Stewart, well known for her characterization of Bella Swan in the Twilight Saga, plays Snow White. Up-and-coming Australian actor Chris Hemsworth (also known as Thor) is Eric the Huntsman. Charlize Theron plays the Wicked Queen, and Sam Claflin is William, Snow White's childhood love.

In this dark retelling of Snow White, not much has changed from the original fairy tale by the Brothers Grimm. The movie begins in a medieval ­setting, with Snow White's mother wishing for a daughter with lips as red as a rose, hair black as night, and skin as white as snow. A princess is born, and not long after, her mother dies. Snow White's father, the king, stricken with grief and sorrow, soon marries another – a beautiful woman who is to become Snow White's stepmother and the new queen. Unfortunately, the king dies and the Wicked Queen takes over the kingdom, imprisoning her stepdaughter.

One aspect that is different in this version is that the audience sees a new Snow White. Here, the fair maiden charges into battle to take back her rightful place as heir to the throne. She evokes the image of a warrior princess. Though unskilled as a warrior per se, Snow White is not portrayed as weak. In the past she was characterized
as a sweet young lady who wouldn't harm a fly – with the animals flocking to her. But here, Snow White is reborn as a fighter, leading men to wage war against her evil stepmother.

So far, 2012 has brought strong female leads that take charge – Katniss, Snow White, and Merida in “Brave.” In the battle scenes, it's clear that Snow White's character has been adapted for this century. Another aspect I found interesting is that “Snow White” does not place much emphasis on love. Sure, William, her childhood friend and supposed love interest, comes to her rescue, protecting her against the queen. But we don't see the princess sharing passionate kisses with anyone. Her focus is on her people and protecting their future.

“Snow White and the Huntsman” is beautifully shot. Director Rupert Sanders does an amazing job, especially during the intense battle scenes. Unlike the rosy-cheeked Disney cartoon version, this film is gruesome and grotesque – the Brothers Grimm would have been proud. With homeless and starving subjects fighting for food scraps, terrors in the Dark Forest, and the Evil Queen piercing birds' hearts, this Snow White makes the original fairy tale look tame.

Stewart's performance is convincing. I will even go so far as to say that she is better as Snow White than as Bella in “Twilight.” It is a different character, so I was able to see her in a new light. Hemsworth is just getting started, and I think he'll be around for a long time. It is a bit unsettling seeing Theron play a villain, but she pulled it off well.

I was impressed with “Snow White and the Huntsman.” I thought it looked cool set in medieval times and was well executed. This Snow White made me want to root for her and fight next to her. I also like the expanded role of the Huntsman. No offense to the original, but I could really see this Snow White as a successful ruler and leader of pure heart, a savior to her people. 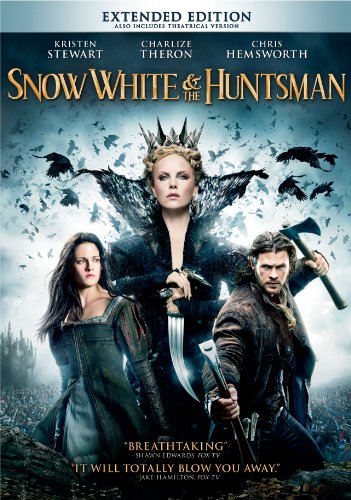 
Buy from Amazon
The author's comments:
My first movie review---please offer constructive criticism! Thanks:)
Post a comment
Submit your own

Favorite Quote:
"The will to win, the desire to succeed, the urge to reach your full potential... these are the keys that will unlock the door to personal excellence."

View profile
Wow that's really good. I haven't read many good reviews, but this one was exceptionally well written!
HammadWaseem said...
on Apr. 1 2015 at 8:05 am
HammadWaseem, Lahore, Other
0 articles 5 photos 283 comments

Favorite Quote:
Be proud of who you are.
-Eminem

You can't see me
-John Cena

Ooh, somebody stop me!
-Mask

View profile
Thats nice @beautifulspirit will you comment on my work? :) TeenInk.com/video/dancing/114206/The-Unbeatable-Breakdancer
Soft_tides said...
on Oct. 11 2013 at 12:41 am
Soft_tides, Delta, British Columbia, Other
0 articles 5 photos 61 comments
View profile
This is just wonderful! The way you organized all of this, and put them into words so fluently is just a sign of perfection! I really liked the way you didn't exactly give nothing away too mucg fro mthe movie, and so the reader gets motivated to go and find out more about this movie and check it out. Overall BRILLIANT! Would you mind checking out my work too? Would love to get feedback fro msomeone so creative! :)
laxgirl06 ELITE said...
on Jun. 24 2013 at 12:44 pm
laxgirl06 ELITE, Cheshire, Connecticut
113 articles 0 photos 21 comments
View profile
Same here :)
beautifulspirit PLATINUM said...
on Jun. 24 2013 at 6:49 am
beautifulspirit PLATINUM, Alpharetta, Georgia
35 articles 0 photos 1398 comments

View profile
Thanks for your comment!
SHER_locked PLATINUM said...
on Mar. 14 2013 at 6:45 pm
SHER_locked PLATINUM, Alta Loma, California
32 articles 2 photos 51 comments
View profile
Great job on the review! Nice plot description. I hate it when people summarize the movie before reviewing it. I mean, if we wanted a summary, we'd look up a summary, not a review! Anyway, good job. I can't say I agree with you about the movie, but you reviewed it well.
Mckay ELITE said...
on Mar. 14 2013 at 5:53 pm
Mckay ELITE, Somewhere, Virginia
146 articles 0 photos 2230 comments

View profile
First, well done on thouroughly explaining the movie without giving any of it away. Second, good use of descriptions and connections with the original and the other 2012 movies. Third, I loved this film just as much as you did. Can't wait for any more of your future movie reviews. I felt like I was reading something out of Rotten Tomatoes.
beautifulspirit PLATINUM said...
on Sep. 15 2012 at 8:38 pm
beautifulspirit PLATINUM, Alpharetta, Georgia
35 articles 0 photos 1398 comments

View profile
Thank you for your comment!
pandagirl312 GOLD said...
on Sep. 5 2012 at 7:40 pm
pandagirl312 GOLD, Leawood, Kansas
19 articles 1 photo 91 comments
View profile
This is a great first review! I love how you've made all of these connections within the review—the movie to the Disney version, the movie to the original fairy tale, and the movie to other recent movies. I also like the actors list in the beginning; it helps readers connect it with previous movies with those actors. I really liked this, nice work! :)