Like Crazy was a very realistic movie; I suppose that’s why I didn’t like it. When I watch a movie I want the protagonist to accomplish impossible things, have a life that weirdly isn’t as simple and boring, if you will, as for normal people.

Like Crazy is a movie about two people who fell in love in college. I liked the beginning, Jacob (who’s name I learned thirty minutes into the movie) was a sweet boy, he made her a chair because the one she had at her desk was uncomfortable (on the bottom of the chair it says Like Crazy), and she, Anna, made him this book about the first year of their relationship with pictures and notes and letters. He gave her a bracelet that said Patience. Anna was from the UK, and her student Visa was going to expire if she didn’t go back to the UK, but she decided to stay the summer with Jacob in America. But of course, when she goes back to the UK, and then tries to get back into America but she can’t because her Visa is banned. Their relationship falls apart even though they scramble and try to put the shattered pieces back together. Jacob starts to see someone else, Samantha, and Anna’s Visa ban would be lifted in six months, so she proposes that they get married.

There are moments in this movie that are happy. They get married and that’s happy. You think it’s going to work out. But somewhere along the line, they silently agree to see other people because Jacob’s back in the US. Jacob starts to date Samantha again and Simon, the man Anna was seeing, proposes to her. Of course she says no because she’s legally married to another man. It’s rather screwed up, the way Jacob and Anna go between one another and then two other people that fit them better. Because I watched Jacob and Anna form a relationship, I grasped on that small possibility that they would be together like they were in the beginning of the movie, before everything got complicated. You could tell Anna and Jacob knew they weren’t going to work anymore, they still tried, hurting Samantha and Simon in the process.

The irony of this movie was that neither Anna nor Jacob was patient. They weren’t content with just waiting for six months to be up so she could come back to the US. This was a great representation of how humans are. We aren’t patient. We want things now, not in 10 minutes, because it won’t be the same as it would have been 10 minutes ago.

This is the kind of movie that makes you want to say important things, sophisticated things, things that could be said in such a movie.
Like Crazy ends when Anna and Jacob are in the shower together, and she walks away, and the shot is on him, and he resembles a zombie (a little bit) and you wonder, as the screen goes black and shows the title, what happened. This movie ended unlike so many others: there was no happy ending. You realize then that the people they were with before

However, there was a happy beginning. We don’t know if they stay together or not. I believe that Anna walking away symbolizes that they weren’t going to be together any longer.

This was a very unique and different movie, the kind of movie you hesitate to keep watching ten minutes in, but are hooked with the possibility of a good ending that, in this particular movie, didn’t ever come. I recommend Like Crazy because it will leave you sad, knowing that this movie will forever and always be a mystery that somewhat resembles our everyday living. 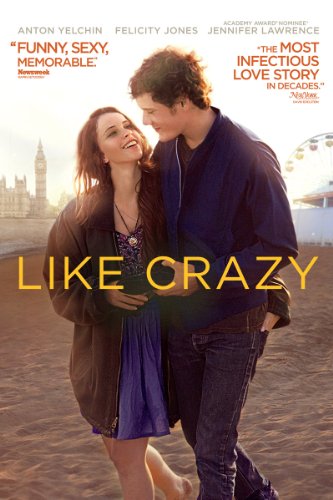 just wanted to mention that i didn't finish a sentence in this and it's bugging me so i'm just gonna finish it here :

"You realize then that the people they were with before were better fits for them."

Thanks! :) sorry for the mistake :P

lilyloveswriting BRONZE said...
on Apr. 24 2012 at 3:16 pm
lilyloveswriting BRONZE, Morrisville, Vermont
2 articles 3 photos 23 comments
View profile
thank you ;) what you said about love is totally true, and this movie represents it well. you should watch it, it's not bad :)
beautifulspirit PLATINUM said...
on Apr. 24 2012 at 10:32 am
beautifulspirit PLATINUM, Alpharetta, Georgia
35 articles 0 photos 1398 comments

View profile
I don't know, maybe I'll like this movie. I've never heard of it. Though it is realistic as you mentioned before, but love is not a fairy tale. I like how you said that we as humans are impatient---it's true. I was reminded of the saying: "Absence makes the heart grow fonder." But this is not always true. No one ever said love was easy---it has it's ups and downs, which you've described in Jacob and Anna's relationship. Your review has intrigued me---now I have to watch "Like Crazy."