No One Killed Jessica | Teen Ink

No One Killed Jessica

No One Killed Jessica is a Hindi film about politics and justice. Jessica (Myra Karn), a young aspiring model, is fatally shot in the head by Manish Bharadwaj (Mohammed Zeeshan Ayyub), the son of a wealthy politician. Jessica's sister, Sabrina( Vidya Balan), attempts to get justice for Jessica. However, the politician is everywhere, tampering the evidence and bribing and threatening witnesses. Meanwhile, Meera Gaity (Rani Mukerji) is a rising news reporter and thinks the case is a waste of time...until Manish is found innocent. Unlike most Bollywood films, No One Killed Jessica does not have dance numbers or action sequences. What is does have are powerful performances, the main example being Balan's. She shows us Sabrina's highs and lows, her anger and pain at the loss of her sister. Meanwhile, Mukerji is tough and unyielding as Meera, who is determined to get justice for Jessica. Based on the true story of Jessica Lall, this film leaves you wanting justice for Jessica. 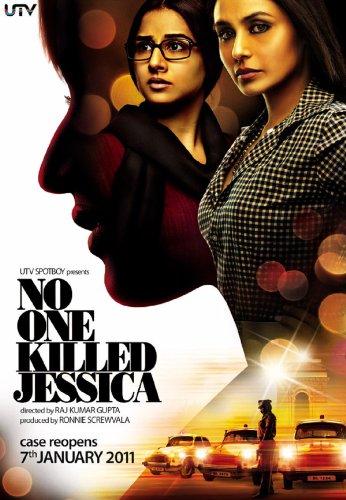