Becky is a bright, young producer of a New Jersey morning show. She keeps everything ship-shape even though her job has turned her into a workaholic, which constantly threatens her dating and social life. When Becky suddenly gets fired from her job, she frantically sends out resumes, but nobody will take her. Then, she gets a call from Day Break -a national morning show that is in the low ratings bracket- asking her to be their new executive producer. Becky jumps at the chance, promising her boss that she'll make the show bigger and better. The first change she makes is firing one of the co-hosts and replacing him with Mike Pomeroy, a serious journalist who thinks that fluffy morning show stories are below him. Not only is Mike stubborn in doing the stories that Becky gives him, but his co-host Colleen doesn't want anything to do with him, let alone work with him. Even though Becky hired a new -and better- man for the job, ratings are still dropping, which is putting her job and the show in danger of being canceled. Her boss gives her six weeks to try to raise the show's ratings. While frantically trying to come up with ideas on how to make the show a big hit, Becky becomes entangled in a romance with a guy that works for the news magazine that's located in the same building. Will Becky be able to save her job and Day Break? Will her work stop her from having a decent, non-work suffocating relationship? Will Mike finally come around and be more agreeable with Becky and the stories that they broadcast? Will Mike and Colleen ever learn to get along?


"Morning Glory" is a fun and heartwarming journey. Rachel McAdams is delightfully quirky and absolutely hilarious. Diane Keaton and Harrison Ford show off their acting chops by giving believable, comedic performances. The chemistry between the main characters is excellently real and makes this movie even better. Bottom Line: "Morning Glory" is a feel-good movie that is classic-worthy and is one that you'll wannna watch again and again. Enjoy! 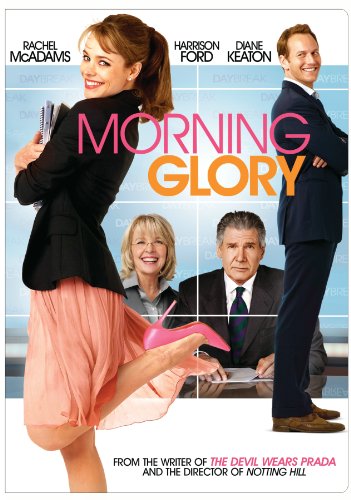 Favorite Quote:
"Don't cry because it's over, smile because it happened."

View profile
Thank you for posting this review - I am going to watch the movie soon and I wanted to know a little bit about it first. Good Job!