"Justin Bieber: Never Say Never" is the eye-opening documentary about one of the biggest(and cutest) pop stars of our generation as he counts down to his big sold-out show at the legendary Madison Square Garden. During the countdown we get to see Justin perform live in concert at many different venues, which includes The Garden. He performs some of his biggest hits- which includes "Baby," "One Time," "One Less Lonely Girl," and "Somebody to Love"-, and he performs with some of the biggest names in the music industry- including Ludacris, Boys II Men, and his pal Usher.

Not only do we get to see Justin work hard on stage, but we also get to see him work hard behind stage as he does vocal warm-ups with his vocal coach and prepares himself for every performance.

Throughout the performances and the Madison Square Garden countdown, we get to see footage of Justin during his early days as a youtube sensation, childhood videos of him harnessing his musical talents as a little kid, his home life, and hundreds of girls screaming and fawning over the seveteen-year-old pop star. We even get to watch him blow the roof off of his huge sold-out concert at Madison Square Garden.

With award-worthy graphics, an inventive beginning, and awesome music, "Justin Bieber: Never Say Never" is something that bielebers and nonbielebers alike can enjoy. It's insightful, entertaining, and biebalicious fun. Enjoy! 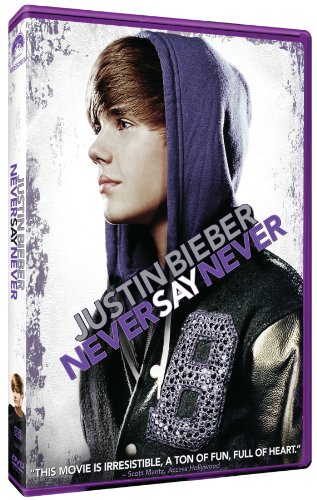