I suddenly wake up to find a woman talking about taking my advice. Who is this woman? Why does she keep calling me Sean? Why does my body look like someone else’s? A bomb explodes. Why am I still alive?
Captain Colter Stevens (Jake Gyllenhaal) is thrust into this scenario. After waking up after what should have been a deadly explosion, he asks Colleen Goodwin (Vera Farmiga) why he’s still alive, as well as why he’s trapped in this small capsule while talking to her through a computer screen. The obviously restrained response leads him to more questions than answers.
The new movie “Source Code” leads to mind-boggling quantum physics and time travel. Every time Captain Colter Stevens goes back in time, he picks up more clues about how to stop the bomb from exploding and how to catch the terrorist who is detonating the bomb. Each time he fails he’s given another chance, another life, to get it right.
But here’s the catch; he only has eight minutes each time. The recently dead Sean gave Stevens the chance to go back in time for eight minutes.
One may think that reliving death (no pun intended) every eight minutes would make one value their time left. However, the numerous unanswered questions coupled with the hopelessness of finding one person out of an entire train is just too much; the stress causes Stevens to crack and want an escape, his only driving force is saving innocent lives.
The necessity of finding the bomb increases when we find out that there is another, much more dangerous bomb connected to the same person, always closing in on the detonation time. Not only that, but each time Stevens repeats those eight harsh minutes his strength deteriorates as well.
These two details create much suspense and realistic pressure to Stevens, and it can be obviously felt in the audience.
They also attempted to tie in relationship changes. The relationship with Goodwin quickly evolves into a makeshift, respectful friendship. The “stranger on a train” bond with the woman, Christina (Michelle Monaghan), across from him quickly evolves into something more, and it is this relationship that keeps sending him back; he wants to save her.
Source Code, the technology allowing him to travel is only meant to allow a new person to experience something in a new way, not to change the past, Goodwin told Stevens. Source Code allows the user to travel through a recently dead person’s body into the past, though for unknown reasons Stevens is sole user to meet the requirements so far.

The helplessness of knowing that everyone around him is going to die in eight minutes no matter what actions he takes is not exactly reassuring, yet he still tries, exemplifying perseverance in the highest degree.
This movie's plot keeps the viewer in suspense while giving out just enough information to keep the audience caring. And it feels real. We learn at a pace parallel to Stevens’s, making all of the confusion and astonishing plot twists all the more realistic and striking.
"Source Code" entwines aspects of wonder, pressure and hopes to create a science fiction piece that will connect to all. 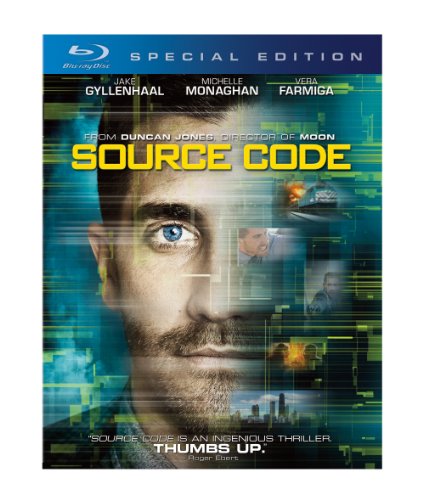 
Buy from Amazon Available on iTunes
The author's comments:
I wrote this for my Journalism class. I really enjoyed the movie!
Post a comment
Submit your own