Favorite Quote:
"You are not special; And I am no hero."

Okay, so, what I want you to do before we even begin here is get a mental picture going. Picture every other zombie movie you’ve ever seen. From the smart and funny, to the gory and cheesy. Think of the quintessential, cliché zombie film. Now, I want you to take that image and flush it down the toilet, because the horror-comedy film, “Zombieland” is anything but.


From the moment the movie starts, everyone of my expectations are all but disproved. How does the movie start? With rules. Yes, this movie is exactly what you wish you could’ve done on your own so that you could get paid, but was too lazy to - a survival guide. So many people have made good money off of this concept, it’s not even funny. (Well, it is, but not for the same reasons.) The flick starts with the voice-over of our soon-to-be protagonist, Columbus (Jesse Eisenburg), explaining why he has become the most unlikely survivor of the zombie apocalypse - by following the rules.

Rule 1: Cardio - “Zombies lead an active lifestyle; so should you.” This point is illustrated by the larger-than-average man running from a zombie on a football field. Long story short, his cardio stinks, he gets caught and…well, let’s just say that I was definitely surprised to see tendons in the first 30 seconds of the movie.

Rule 2: Double Tap - “Don‘t be stingy with your bullets. One shot might not be enough to put away a zombie away. For example, this poor thing. One extra shot to the head, and this woman could have avoided becoming a human Happy Meal.” (I‘m paraphrasing these rules, by the way.)

Rule 3: Beware of Bathrooms - “There‘s no worse way to die than getting eaten by a zombie with your pants down.”

Rule 4: Seatbelts - Like Columbus mentions, this is a no-brainer. But you tend to forget when you’re running away from mindless flesh-eating toddlers like the lady at the start of the movie. She didn’t see that flatbed in front of her, and went flying through the windshield. The viewer is then treated to slow-motion footage of the world falling apart ala zombie apocalypse - set to the always cheery tune, “For Whom the Bell Tolls” by Metallica - which was brutal, yet oddly majestic.


How did it come to this? Columbus, our hero-by-default, describes it as, “Mad cow became mad person became mad zombie.” Or a diseased hamburger at a shady, filthy gas stop, set into motion a worldwide epidemic that inflated a certain part of the frontal lobe, causing its victims to believe they are mindless, blood-thirsty cannibals. So, by following these rules, and keeping a rifle by his side, Columbus ventures across this barren landscape on his way to his hometown of Columbus, Ohio to see if his parents, also sheltered shut-ins, are still alive.

On his way, he meets up with three very different individuals, all out on their own separate adventures. First, we meet Tallahassee (an amazing Woody Harrelson), a loud, rowdy, knock ‘em down, git ‘er done redneck superhero (or at least the equivalent of one) who has left to find a new zombie-free home and a supply of Twinkies. Then we meet the tough-as-nails sisters, Wichita (Emma Stone) and Little Rock (Abigail Breslin), who are on their way to Los Angeles to reach their childhood sanctuary, Pacific Playland, which is supposedly “zombie-free.” I know, right? Kind of obvious; that’s what we literary types call Dramatic Irony.


The thing that makes this movie so great is set into motion almost immediately with the seemingly everlasting wit and humor. The kind of humor that makes you think about the joke for a second, and then makes you burst out laughing. And I did. We did. My bud sitting next to me, and the entire theatre, for the whole movie! Think of it as a brilliant cross between Shaun of the Dead and Road Trip except for two main differences. 1. It’s funnier and scarier. 2. It‘s actually worth watching (that‘s when you compare it to the Road Trip movie). There is a constant presence of quick-witted comments and one-liners throughout the film that give it a never-ending novelty and replayability that many films would trade their entire budget for.


Some of the more memorable moments? Too many to name, but I’ll try. Let’s start at the beginning with the opening flashback at Columbus’ college apartment, where he saves a young girl from a homeless man infected with the disease. He lets her in and she falls asleep beside him on his sofa. This is the first of the endless stream of quotes from the movie. “Someone‘s in danger of having their hair brushed behind their ear.” That is until he woke up to find out that after almost getting to second base for the first time ever, the girl is trying to eat his face off.

Tallahassee and Columbus are trucking along when they come across a Hostess truck. Tallahassee, who is obsessed with finding that Twinkie, breaks open the door to find, “Snoballs? Snoballs?! Where are the *#$% Twinkies?!”

And let’s not forget the cameo from comedic legend Bill Murray. He only appears for a few minutes, but these few minutes turn out to be one of the funniest movie sequences that I’ve seen in years! And, as the scene wears on, it goes from random to funny to quirky to almost brilliant. If I remember correctly, my sides stopped hurting in time for me to see the end of the following scene where the crew camps out in Murray’s massive mansion.

The movie ends in an all-out, free-for-all, blazing guns climax at Pacific Playland. How many zombies are there? For all you gamers out there, think live-action Left 4 Dead. Yeah, it’s intense and it will keep you on the edge of your seat until the very last zombie. All I have to say without giving away the ending is, “*#$% that clown!”


This movie doesn’t have much in the way of a plot, and doesn’t have too much closure. At the end of the movie, the world is still in ashes, and any survivors are still being chased down by zombies. But who really cares? Entertainment is the goal at the end of the day, and even without a real plot, the writing of this movie is still brilliant. Smart, witty, funny humor that will keep you laughing throughout. In the end, the four travelers see each other as more than fellow survivors. By the time the lights go up, you get a sense that these four are the closest things to family they’ve ever had. That’s what true family is all about; not necessarily bound by blood, but by the feelings they have for each other. Columbus views his three cohorts a little more deeply as the movie goes along. Tallahassee as a friend, Wichita as a love interest, and Little Rock as a sibling.


If you don’t mind gut-filled zombie violence as well as random (and not-so-random) outbursts of buckshot, language and attitude, this is a must-see. Sure, it’s rough around the edges but with a run time of about 95 minutes, it doesn’t overstay its welcome, which is way too easy to do as a horror-comedy. Surviving a zombie apocalypse is difficult and dangerous work. The same is true in Zombieland but here, it’s wildly entertaining as well. 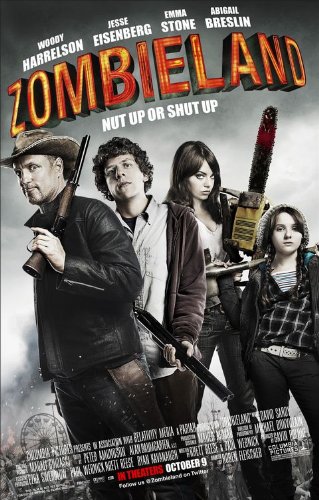 
Buy from Amazon Available on iTunes
The author's comments:
I truly enjoyed this movie for the writing. An aspect that has been in tragic decline for the past several years. This movie has smart, witty humor that genuinely makes you laugh, long and hard. For a horror-comedy, it's funnier than "Shaun of the Dead" (another great zombie movie) and blends to two genres better than the recently released "Jennifer's Body."
Post a comment
Submit your own

View profile
I give you 5 twinkied also for this well detailed review. I'd say not to spoil the movie next time. Or just say SPOILER ALERT. Other than that, it reminds me just how much I enjoyed watching this movie. Awesome piece.
Dlord910 said...
on Oct. 22 2012 at 8:05 am
Dlord910, Wilmington, North Carolina
0 articles 0 photos 8 comments
View profile
Great review and movie