Inglourious Basterds begins with the words “Once upon a time,” and, like any classic fairy tale, it features a daring quest (assassinate Adolf Hitler and other Nazis), brave heroes (the eponymous Basterds), lovely dames (a German actress and a Jewish cinema proprietress who help with the quest), and a scheming villain (the deliciously evil SS officer Hans Landa). Unlike most fairy tales, though, the film has buckets of blood and very explicit violence, it changes World War II history completely, and it does not have a happy ending for all its characters—in fact, the ending is rather muddled and rushed. If you can abide these aspects of Inglourious Basterds, then you are in for a very entertaining two and a half hours.

The film is divided into five chapters and consists of two separate storylines, making for a jumpy narrative that is at times hard to follow. One storyline is about the Inglourious Basterds, a group of Jewish and other anti-Nazi soldiers led by Lieutenant Aldo Raine (Brad Pitt). Their goal is to avenge themselves against the Nazis because “Nazi ain't got no humanity,” though they themselves are also performing unspeakable acts of violence, such as scalping one hundred Nazis each and carving swastikas into the foreheads of the Nazis they allow to escape. Though the film is named for them, the Basterds serve mainly to unnecessarily complicate the plot and provide shock value and comic relief.

The second, more developed, and more serious storyline follows Shosanna Dreyfus (Mélanie Laurent), a young Jewish woman who, years before, had escaped the murder of her family at the hands of Hans Landa (Christoph Waltz). She has changed her name and is now living in Paris as the proprietress of a movie theater. Like the Basterds, she also wants revenge against the Nazis, and she sees an opportunity when her movie theater is chosen to be the venue of the premiere of a Nazi propaganda film.

Both Shosanna and the Basterds plot to assassinate Hitler and many high-ranking Nazis who will be in attendance at the premiere. Neither party knows about the other, which really defeats the purpose of having two storylines. The suspense builds up to the extreme but never quite amounts to anything.

Despite its flaws, though, Inglourious Basterds stands out as a very unique and enjoyable film, with doses of great comedy and action and a screenplay that took over a decade for director Quentin Tarantino to write. One of the film's strongest points is the acting, especially that of Christoph Waltz, who plays the villain with so much natural talent and ease that it is hard not to like him (is an Oscar nomination for Waltz on the way?). Most of the dialogue is not in English, so viewers must read captions when characters speak French, German, or Italian (the Italian sequence is, by the way, perhaps the most hilarious scene in the entire movie). The use of multiple languages, the large cast of characters, the complexity of the plot, and the quick pace warrant a second viewing of the film. Watch it once, or watch it twice, but this deranged fairy tale is worth your time. 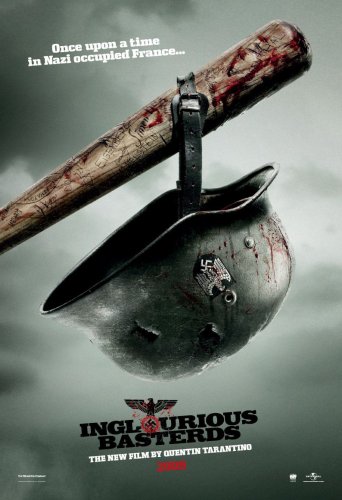