Green Book is a best selling Comedy-Drama which touches different issues set around the 1960’s mainly revolving around discrimination, such as racism and homophobia. Starring Viggo Mortensen and Mahershala Ali, this movie revolves around a African-American pianist who hires Tony Lip, an Italian-American from the Bronx neighborhood in New York. In this Best-Picture-winning movie, we can clearly see how two different people, each one describing its opposite stereotype, can bond together regardless of their segregated races. This movie has been inspired by true events, those revolving around the real Tony Lip and Don Shirley in which many details of the movie have been linked to the real life cases: ranging from the hot dog eating contest to the requisite of always playing on a Steinway piano.

In this movie we can see the representation of racism in Tony Lip, being as racist as throwing drinking glasses in the trash bin since two African-American workers drank from them while they were working in their home. Throughout this trip, we can see how Tony’s opinion drastically changes of Don. In the beginning of the movie, we can see how Tony doesn’t really want to talk to him or take orders, however throughout the story we can see his subtle enjoyment of spending time with Don and bringing his protective side towards him. The movie also uses irony to reject the stereotypes revolving around these two races. We can see that Tony loves fried chicken and acts ghetto and informal: these being stereotypical traits associated with African-Americans. On the other hand, Don acts very formal, listens to classical music and has manners: stereotypes associated with Caucasian people. This movie subtly states that stereotypes are nothing but unnecessary labels based on inaccurate categorization.

Even though the movie is titled Green Book, the book itself is only mentioned a few number of times and it doesn’t hold as much significance to the story. The real Green Book is an actual book written by Victor Hugo Green which has the motive to inform African-Americans about hotels and other locations which would accept people of color. This made road trips a lot harder and longer for a different race only because of the discrimination, an important issue which could have held more importance in the movie itself and its message. Green Book has also received criticism from the press and the audience, claiming that it shows this idea of a “white savior” and the inaccuracy of the real Don Shirley. However, even though inspired by true events, this movie isn’t a documentary meaning that it can still alter a few happenings and descriptions of the true story by making it more entertaining for the person who is watching it. This doesn’t necessarily mean that the story needs to be completely precise to the real events.

Another constructive message portrayed in this movie is the importance of family and how money doesn’t equal everything in the world. We are quick to observe that Don Shirley is very wealthy, for example when he is introduced we can notice how his house is very fancy and higher class, while Tony’s house is small and average. However, in the end of the book, the movie portrays that regardless of how stylish or wealthy your house is, it can never be as valuable as a house filled with family and love.

Overall, I really liked this movie since it depicted different message which remain significant to an individual’s life and I also enjoyed how they brought voice to the awareness of racism which has been and still is very common around the world. I would’ve enjoyed more if the real Green Book was discussed more in the movie and held more significance since it was the title of it. An additional detail which would’ve been interesting for me to watch and something more significant to the message of the movie, would be that in the end of the story we would see Tony drinking from the same glass which the African-Americans drank in the beginning (the ones which his wife got back after they were thrown by Tony) in order to represent the transition in him as a person. In conclusion, I really did enjoy this movie since it portrayed various messages and depicted the wrongfulness in racism while still managing to end the movie in a cheerful manner set in the classic and joyful Christmas Eve. 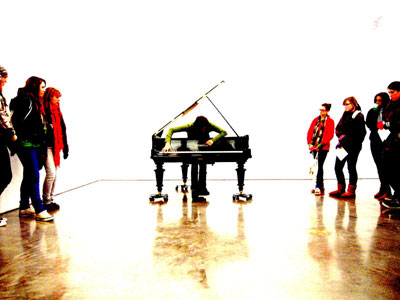