The Way of Kings by Brandon Sanderson | Teen Ink

The Way of Kings by Brandon Sanderson

BRANDON SANDERSON is nothing short of a modernized Tolkien.


Praised for his completion of Robert Jordan's A Wheel of Time, as well his own books, The Mistborn Trilogy, Elantris, Steelheart, The Rithmatist, the Hugo Awarding winning novella The Emperor's Soul, and the epic in progress, The Stormlight Archive, he could be called the king of modern epic fantasy, his work appraised by brilliant authors such as Orson Scott Card (author of “Ender's Game”) and Patrick Rothfuss (author of “The Name of the Wind”).


In The Way of Kings, Sanderson strives to answer deep, in depth questions, create a story worth telling, and fabricating a world that is livable.


Despite the daunting word count, The Way of Kings proves a fast-paced read, stocked full of wars, battles, and murders of epic proportion.


It follows several characters in their struggle during a war between two capable forces—the Alethi, and the Parshendi.


Highprince Dalinar Kholin struggles against confusing visions and yet more confusing politics as he attempts to bring together the other Highprinces—all fighting against the same enemy, but separately.


Shallan Davar must steal a device called a Soulcaster from the highly acclaimed scholar and judged heretic, Princess Jasnah Kholin, and get it back to her brothers, without being discovered.


Kaladin Stormblessed—once a soldier, reduced to a terrible fate—carrying bridges across plateaus for Sadeas's army to cross—and for Parshendi to shoot at, fights to keep the men of Bridge Four alive long enough to escape.
Full of real, vivid characters, a world of storms and stone, where Stormlight powers lamps and takes lives, daunting creatures called chasmfiends lurk in the dark pits of the Shattered Plains, and rank is divided by eye color, Sanderson creates a sure epic in the making, a saga of revenge, redemption, bloodshed, and a very real look at the human heart.


I anticipate The Way of Kings will be on the shelves for quite a while. 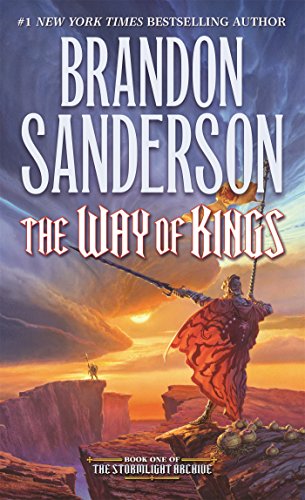