As a person who was fairly skeptic of love, fell for it, and had the misfortune to become a skeptic again, quite recently, reading Rainbow Rowell’s Attachments was a bit of a daunting prospect. But the style felt unfamiliar; it felt new, and I was curious to read it, even if it meant dabbing my eyes with a tissue afterwards.


Attachments is a story of a guy named Lincoln, who hasn’t had much success in life. He is 28, lives with his mom, and works as a well-paid systems security officer tasked to check emails of newspaper employees for any red flags. As much as he hates peeking into other people’s stuff, Lincoln finds one conversation particularly intriguing. It’s between two friends Beth and Jennifer, and although they spark a lot of red flags with their incessant personal conversations, Lincoln never warns them. Instead, he keeps on reading their emails, and slowly starts developing a crush on Beth, whom he has never seen.


Everything would have stayed the same if Beth had not fallen for a cute guy who, incidentally, turns out to be Lincoln. But Beth is in a relationship, Lincoln has never seen her, and although he knows she has a crush on him, he can’t do anything about it except pine away. Until the day he decides he has had enough of the attachments holding him when he can do nothing about them, and tries to move on, only discovering later that not everything goes according to plans, and sometimes, things may work out in a way not even fate can understand.


The great thing about Attachments is that it is not just a love story. It’s the story of unusual friendships that extend beyond normal boundaries. It incorporates selflessness, generosity, freedom, and a lot more besides. It tells you that it is okay to hold on to the past until you’re ready to let go, and that sometimes, a long relationship doesn’t equate with happiness.


For me, Attachments was a personal reminder that love isn’t supposed to work out every time. But unexpected things could happen, and hoping for them is better than sogging a pillow at 2 AM. I’d recommend everyone to read this book and look for what it tells them. Spoiler: It’s going to be something good. 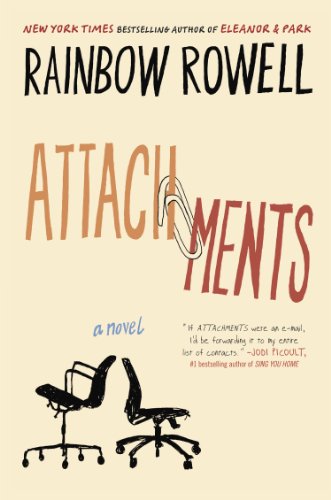 I've been a huge fan of Rainbow Rowell since I read Fangirl. And discovering Attachments was almost something that happened by chance, and I would like everyone to read it.