Author Nora Price’s novel debut, Zoe Letting Go, follows thirty-six days of seventeen year-old Zoe’s life when she is admitted into an exclusive residential hospital, Twin Birch. Zoe has no idea why her mother has sent her out into the middle of nowhere to live with six other frail girls in a creepy and old-fashioned brick mansion for five weeks. Immediately she realizes that she doesn’t fit in with the others, the girls who have shoulder blades so sharp they could cut wood, and stare at food as if they could, with a glance, make it disappear. After reading a brochure she stole from the hospital coordinator’s office during admission, Zoe discovers with horror that Twin Birch is a hospital that specializes in eating disorders.
The problem is: Zoe doesn’t have an eating disorder.
Or so she believes. She’s not as frighteningly thin as the others, and they know it. She eats. She and her best friend, Elise, ate together every day.

During her five week stay at Twin Birch, Zoe writes letters to her best friend, Elise, since she is allowed no other means of communication. And even though Zoe never receives word back from her friend, she continues to update her about the crazy workings of Twin Birch and the other girls there, as well as reminisces back on memories of their times together before the hospital. Zoe writes about fun times they had together, but then darker memories in Zoe’s stories reappear of Elise’s aversions to food and her thinning hair.

With a psychological twist, and enough suspense to keep a reader glued to the pages, Price introduces protagonist Zoe as a relatable but spunky character readers want to learn about until the very end, when we finally learn why Zoe was admitted to Twin Birch. Why Zoe, a normal teenage girl, is placed among other girls who seem to be so obviously different from herself.

Evident even in her debut novel is the fact that Price seems to have mastered the art of keeping a reader close to her book, craving more and more until one realizes there are no more pages left to turn. Mental illness, undoubtedly serious and should be treated as such, is fascinating to explore, especially through rehabilitation stories of hospitals and treatment centers, which seems to have become increasingly more visible in young adult fiction. But unlike some other books I’ve read with similar concepts, Price managed to grab my attention with her riveting story-telling and details, and it kept me hooked.

I do believe some characters could have been developed more, or given even more humanistic qualities in some cases, since I found some characters difficult to relate to. I also didn’t know how to relate to them without knowing more about them or their back-stories, which though not entirely relevant to Zoe’s story, would have been a desirable addition to the novel nonetheless. I also felt like there were certain plot points introduced that were not explained later on, which – though it gives my imagination some freedom – left me a bit disappointed.

Similarly, as major twists began to unravel, details of the story seemed to be hurriedly thrown in that I wish would have been delved into a bit more, as the lack of information leaves one to just guess or assume when I would have loved to read more about Price’s actual intentions.

However, in terms of entertainment, Zoe Letting Go is a fascinating read. Not a book I’d add to a shelf of favorites, but it’s definitely worthwhile, thought-provoking, and compelling for anyone who may be particularly interested in reading fictional accounts of mental illness. 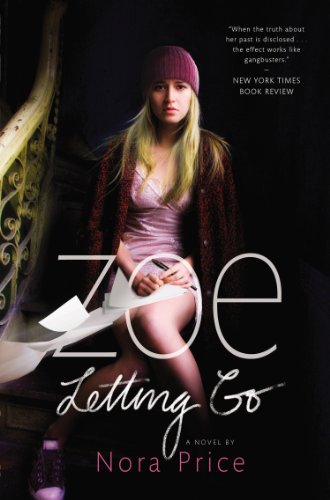