What can I say about this book? What is there to say? Ashes by Ilsa J. Bick, contains a strong and compelling narrative, and partly because of this, separates itself from other zombie/horror books of the modern day. However, its frequent grammatical and continuity errors were, in my opinion, too much for even the most talented of writers to overcome.

The book begins with a phone call from a girl, Alex, to her Aunt Hannah. As they converse, Aunt Hannah profoundly denounces what Alex is doing, which is to say, seemingly running away. What Alex claims instead, is that she is merely taking her parents ashes to the far north (though to scatter them or just have them with her, it is never truly revealed). As she sits at a Michigan gas station, arguing with her Aunt, Alex says that she will be back in twelve days. Unfortunately for her, the trip lasts much longer.

While out camping in the woods Alex meets an elderly man, and his granddaughter Ellie. While the old man seems polite enough, Ellie is portrayed as the stereotypical bratty little kid, and even goes as far as screaming at the others and marching off while Alex and the girl’s grandfather talk. Unfortunately (I know, twice in two paragraphs), some kind “thing” hits the clearing. Not a physical, tangible thing, but more of a sound or light wave of some sort. This “thing” (or Zap, as Alex comes to call it) not only makes the forest animals go crazy, not only kills all of the campers’ electronic devices, but also makes all the people keel over in pain. In the process, Ellie’s grandfather is killed, due to the parallel death of the pacemaker that kept his heartbeat steady.

Well, one would think that such misfortune could not grow, right? I mean, sure Ellie and Alex are now stranded in the middle of the woods, with no way to contact anyone, and with only meager rations of food and water, but things couldn’t get worse, could they? Unfortunately (third time’s the charm!) things can, and the duo find that out the hard way when they run into a couple of other high school kids out in the woods. What’s wrong with that? These kids have turned into bona fide zombies; quite literally “these kids weren’t munching sandwiches…with a grunt, the boy plunged a fist into the woman’s abdomen and rooted around before coming back up with a drippy fistful of something liverish and soft…” (73). What follows is one wild ride as Ellie, Alex, and a whole other cast of characters attempt to survive not only the elements, but the walking dead.

Honestly, the prose of Bick’s story was great. The thing that I had trouble with were her multiple grammatical typos and continuity errors. Just for an example, there’s one point where the party is walking past an abandoned farm, and Alex claims to see dead sheep. Not a moment later, she claims to see dead cows. Not additionally, and no other reference to the sheep is made, simply the cows. It leaves a reader to wonder, who the heck edited this? I could find another four or five examples such as that one, and while they may not reflect on the entire book, they certainly were distracting.

Another problem I had with this book is that towards the closing chapters, Bick decides to hit up the long clichéd Team Heartthrob against Team Another Heartthrob. And while it is practically assumed that one of the said heartthrobs is dead, that twist is not fresh nor exciting enough to prevent one from realizing what is really happening (especially since it is revealed in the excerpt from Ashes’s sequel that the dead heartthrob is very much alive). It is frustrating to see such a thing occur, especially after a good storyline.

And Ashes contains just that. Not only a solid, but a compelling storyline. Bick bravely slugs through the mishaps and mistakes, and what she produces is something quite beautiful, if not entirely polished. I do not know who is to blame for the typos and errors that can be found in Ashes, whether it be Bick or someone else. All I know is that the though narrative delivers, it is sad to see it distracted from so much.

In total, Ashes by Ilsa J. Bick is a powerful tale of survival in a post-apocalyptic, zombie-infested world. Bick breaks the mold with her compelling characterization, and driving plot. Unfortunately (oops, a fourth one) she needs to reread her book. Here’s to hoping for a better second print! 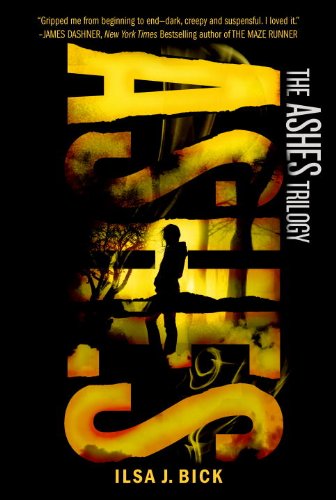 
Buy from Amazon
The author's comments:
I read this book as part of my schools Battle of the Books competition. If you’d like to see other reviews I’ve wrote on other B.O.B. books, then take a look at my profile. Thanks!
Post a comment
Submit your own