A Confusion of Princes by Garth Nix | Teen Ink

A Confusion of Princes by Garth Nix

When I began reading A Confusion of Princes by Garth Nix, I didn’t really know what to expect. The cover looks fantastical and enticing, but I never had read any of Mr. Nix’s other books before.

What I got was a different kind of story; not your typical sci-fi adventure.

Many years into the future, in a galaxy much unlike our own, an Empire rules a great swath of space. Over many thousands of years, this Empire has conquered an enormous section of the galaxy, mostly on the backs of its young Princes.

The ten million Princes of the Empire are essentially augmented humans, with mental, physical, and biological abilities far reaching any of our own. However they are still mortal and can still be killed, though most Imperial subjects see their rulers as immortal gods, even though the life of a Prince isn’t so peachy keen. Princes are chosen, when young to join the ranks of the superhuman, being taken from their parents and raised in temples amongst priests of various orders until old enough to leave their home temple and join one of the seven services of the Empire: Navy, Marines, Survey, Diplomatic Corps, Imperial Government, Colonial Government, or Adjustment.

Our story follows that of a young Prince Khemri, who leaves his temple to join the Navy, mostly for the protection it offers from assassination; assassination that would normally come from other Princes. However, after a while, Khemri soon leaves the Navy for the more secretive work of the Adjustment division, not quite getting what he bargained for.

In the end, Prince Khemri is de-augmented, flung to the fringes of the Empire, and commanded to find his way back, all as a test he must pass in order to join Adjustment. However, when interacting with Fringe humans, Khemri begins to recognize his humanity. Also he realizes that he may just have to help the Fringe settlers out if he ever wants to see the Empire again.

Personally, I thought that A Confusion of Princes was alright, but not the greatest book I’d ever read. The plot was rather rambling, the lulls between action stale, and the romance awkward. Truthfully, I said to myself more than once: “This book reads like a video game!”. Which isn’t much of a problem if don’t mind storylines that seem rather flat or one dimensional.

On the flip side, I did think that the book’s message of humanity, and how we cannot take it for granted, was well displayed, especially in all of the transitions Khemri goes through. And though I criticize the dead space that seemed to hang between each action scene, when there was action it was enthralling. I could hardly stop reading when one Prince was trying to assassinate the other, or when they were dueling to the death, or when a band of ravenous pirates went to battle with the Empire. I couldn’t put it down.

Alas, while Mr. Garth Nix has provided a story for the total action enthusiast, A Confusion of Princes can become almost unreadable at times with its dragging space jargon, and cold, mechanical seeming central characters. If you can look past that though, and the books “video game-esque” style, this book may be one for you. 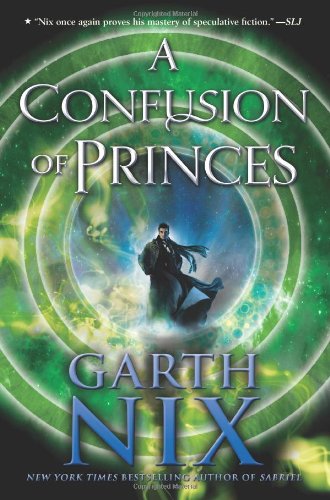 
Buy from Amazon
The author's comments:
I'm currently reading this book for my school's Battle of the Books competition. If you'd like to hear about more books I'm reading for B.O.B, say so!
Post a comment
Submit your own