Where does one go to get his/her wishes granted?

Kimihiro Wantanuki is a high-school boy tortured by images of Y?kai (supernatural spirits of Japanese folklore) and spirits. These other realm creatures are attracted to the scent of Watanuki’s blood, a fact that’s plagued Watanuki ever since the death of his parents. One day after being chased by a spirit, Watanuki finds himself at the entrance of a mysterious shop. The even more mysterious owner of the shop, a beautiful woman by the name of Y?ko Ichihara, tells Wantanuki that the shop that he just entered is one that grants wishes. Wantanuki finds himself having accidently making an agreement with this witch; in exchange for the granting of his wish Wantanuki now has to work as a servant in Y?ko’s shop. However, Wantanuki shortly discovers just how bizarre this shop can be…
XXXHolic is a prime example of a phenomena-based manga. The combination of the diverse characters, the unique setting, the extraordinary costume designs, and the folklore all blend into one very entertaining series. The art is done in the style of Ukiyo-e (Japanese woodblock prints), without the use of screen tones, unlike most manga, and provides a very simple, refreshing portrayal of the very complex storyline. The designs of the characters introduced in the volumes are an interesting combination of simple yet excessively illustrated designs. The costumes worn are an amazing combination of modern and old-fashioned Eastern and Western fashion, all depicted in amazing amount of detail (as to be expected from a group of all female mangaka). I became immersed in a world filled with fox-spirits, ancient rituals, fortune-tellers, and ghosts, the book made me feel like I was right beside the characters sometimes, experiencing their thoughts and actions. Although seinen manga is generally geared towards an older male audience, audiences of both genders should welcome XXXHolic; those who love action stories are going to appreciate the amount of horror and spirits depicted throughout the series, but romantics will enjoy the legends and costumes pictured.
I was thrilled when I discovered the series. As a literary, history, and art enthusiast, I thoroughly enjoyed learning various history lessons from the folklore introduced in the chapters, loved reading about the situations the main characters get roped into, and was continually mesmerized by the costume designs worn by the witch. The main character, Kimihiro Watanuki, is one of my personal favorites in this series, he’s not your typical manga protagonist, as in he won’t go jumping off of buildings or saving damsels in distress; however, he is a flawed character that I would recommend watching for progress in. I would recommend XXXHolic for anyone looking to be able to escape reality, and experience a world they’ll want to disappear into. 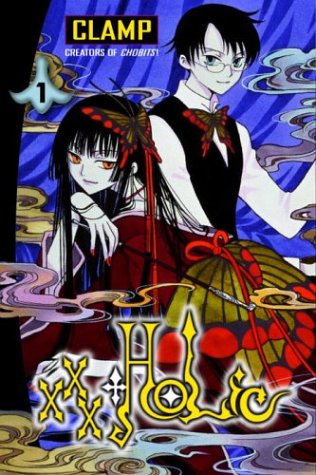 Favorite Quote:
“You have brains in your head. You have feet in your shoes. You can steer yourself any direction you choose. You're on your own. And you know what you know. And YOU are the one who'll decide where to go...”
― Dr. Seuss, Oh, the Places You'll Go!

View profile
I have to agree. I recently finished the series, and it was refreshing and relaxing to read. Starting it in Japanese! I like your review as it provides a good basic overview of the themes as well as information on the style. I learned some, amd it was well-presented.