What do a high school dropout, the school star, and a guy in a wheelchair have in common? Their love for basketball – a passion that occasionally appears to be an obsession.

Nomiya Tonomi is basically your anti-protagonist; he's loud, he's rude, he's not very smart, and he loves roughing up people when he's angry. However, there's more to him than meets the eye. Tonomi is a basketball fanatic, often referring to famous players and constantly practicing. When he meets Togawa Kiyoharu, a former wheelchair basketball champ, these unlikely friends bond and get caught up in the world of jump shots, dribbling, and drama. Intertwined with them is Takashi Hisanobu, the school bully/star player on the basketball team, who quickly winds up in an unfortunate ­situation that will force him to re-evaluate his life.

Takehiko Inoue is, in a word, genius. The energy and enthusiasm created for a sport in one book is simply breathtaking and will leave the reader dying for more. The art style is rather refined for shounen manga; the details and shading infused into the artwork are stunning and quickly grasp the reader's attention. I was intrigued by the idea of a manga exploring a topic that most authors, manga or otherwise, don't touch.

Although it has the elements of any shounen manga – rough characters, action, a bit of drama, and a few schoolgirl skirts – this is a series that'll do well with any audience. The story is thought-provoking and honest, going into the gory and occasionally disturbing details of someone who has been physically changed. Although I don't usually read sports manga, I found myself enjoying this first volume very much. The dynamics between the characters, the controversial storylines, and the exquisite artwork all hooked me and left me reeling for more.

Inoue was already legendary for his previous shounen manga series Slam Dunk and Vagabond, two other action-filled books that will make any manga or fiction fan stop in their tracks, yet REAL takes the prize. 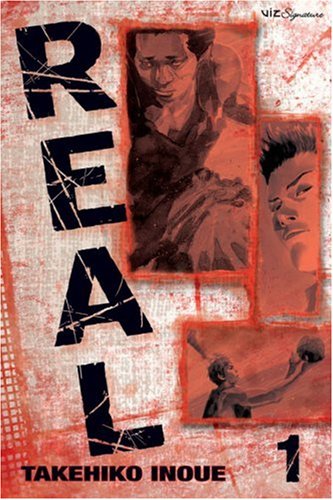