CatWoman is essentially the quintessence of the purrrr-fect anti-hero. While still taking jobs of a less than legal nature, CatWoman is directing her interests to more noteworthy and possibly dangerous interests…
CatWoman, or Selina Kyle, is still the same daredevil, though she’s taking different types of risks this time. Now with the help of her new intel woman, Gwen, CatWoman’s been partaking in the auto-theft business lately, making new acquaintances along the way, such as a gorgeous new thief named Spark (who seems eerily like a male equivalent of CatWoman), meeting with older, less amicable acquaintances such as the exuberantly rich criminal dubbed the Penguin, and a new string of psychotic villains. Danger quickly arises for CatWoman when she finds herself playing the role of the good guy as she attempts to resolve the issue of street kids and hookers disappearing off the streets. As CatWoman finds herself confronting crimes and evil-doers that come a little too close for comfort, the feline anti-hero finds herself immeasurably in over her head…


The momentum of CatWoman (The New 52) series is still keeping strong with the publishing of the second omnibus volume. Judd Winick’s writing style keeps the story and action as sharp as ever with his clever plot twists and ambiguous character roles. This volume is clenching, exciting, and more than a little bit gruesome during some very action-filled scenes. CatWoman’s less than pure past and sensitive side were further presented as she attempted to rescue young, downtrodden teens from the horrific actions of an extremely demented villain. The introduction of new and more well-known characters alike is thrilling and a definite treat for those who are looking for a exhilarating and fast-paced plotline. BatMan does have a small cameo in this volume, though not as much to thoroughly please the fans of the Batman-CatWoman duo. However, writer Judd Winnick leaves faint hope for more hot-and-heavy scenes between the iconic (power) couple, as the mysteriously dark and handsome vigilante comes to CatWoman’s rescue again.

CatWoman, with slightly longer hair this time, is still as gorgeous; however, with the addition of a second artist (Adriana Nelo) to Guillem March’s original artwork, the style of the comic has has shifted. The color scheme is darker, befitting the bleaker tones of the story, and the character’s profiles slightly differ from the original design concepts. However, I would be lying if I were to say that the latest edition of CatWoman The New 52 didn’t gratify me, both as a reader and a fan of CatWoman. The gripping plotline, wide range of characters (from gorgeous to gruesome), and the interesting character twists leave me waiting for more.

*Warning: Some scenes in this comic can be regarded as inappropriate to younger audiences, and should be regarded with caution by those uncomfortable with more adult themes. 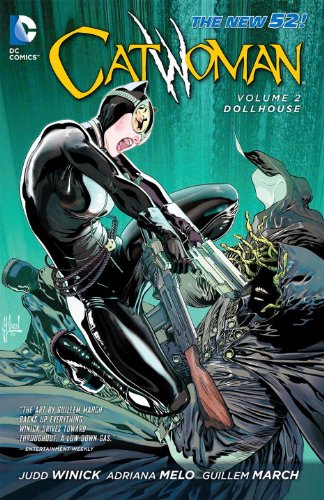