Pride and Prejudice by Jane Austen

Undoubtedly, Jane Austen’s masterpiece is Pride and Prejudice. This light romantic comedy presents a dysfunctional family, whose lives change when young aristocrats move into the neighborhood. The novel centers on the life of Elizabeth Bennet, the second oldest Bennet daughter, a young free spirit who has prejudices against the wealthy upon meeting the arrogant Mr. Fitzwilliam Darcy. At first, the two understandably loathe each other, but soon are attracted like the two opposite poles of a magnet are unfathomably attracted to each other. In addition, despite being from two different social classes, Darcy and Elizabeth set out to break the barriers of social classes.

With wit and distinct use of description, Jane Austen creates a bewitching and enrapturing tale of love between two different social classes. Her dialogue is brilliant and her characters are memorable—from the melodramatic Mrs. Bennet to the sarcastic and often cynical Mr. Bennet to the kind-hearted Jane Bennet, who Anna Quindlen cleverly remarked as “the sugar to Elizabeth’s lemonade”. Her prose is one of the most sophisticated prose writing in English literature. Moreover, her themes of pride, prejudice, love, social class, and family devotion make this novel the masterpiece it will always be. From the beginning iconic line—“It is a truth universally acknowledged…”—to Finis, Jane Austen never disappoints or lack wit or charisma, despite what some may think. Austen proves that you do not need fast-paced action, profanity, or sexuality to create a masterpiece that has influenced major works, parodies, innumerable fan-made epilogues, prequels, and sequels, and films—such as Twilight, Pride and Prejudice and Zombies, and Bridget Jones’s Diary; although she herself uses some mild suspense in this novel.

The novel has been adapted into countless films and television series; most notably the 1940 film, starring Greer Garson and Laurence Olivier, which won one Academy Award for Best Art Direction (Cedric Gibbons and Paul Groesse). The other famous adaption of Pride and Prejudice is the 2005 version, starring Keira Knightley and Matthew Macfadyen, which was nominated for four Academy Awards for Best Actress (Keira Knightley), Best Original Score (Dario Marianelli), Best Art Direction (Sarah Greenwood and Katie Spencer), and Best Costume Design (Jacqueline Durran). 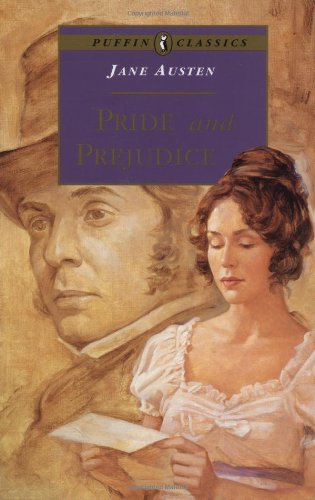 
Buy from Amazon
The author's comments:
You will love reading this novel just as much as I did. It's one of my favorites.
Post a comment
Submit your own

Favorite Quote:
I've learned that people will forget what you said, people will forget what you did, but people will never forget how you made them feel.
- Maya Angelou
When i was little/I used to point a chubby finger toward the dark sky/And ask my father/why some stars moved and others didn’t/He would laugh and explain that some were airplanes/I still wish on them today ~ Laugh-It-Out
The feathers of a crow are black/The ink of my pen is blacker/The pain of my heart is blackest~ Mckay
If love produced a blossom/I’d take it in my palm/What a blessing, the bright color!/How soothing, such a balm!/I’d keep a petal for my own/The rest, drop from my hands/For such a flower would multiply/And populate the lands~ thesilentraven
And I began to rival legends/Long entombed before my birth./But for all my much envied fame/The lust for more would not abate./The plaques and prizes with my name/Will, like all things, disintegrate. ~ TheEpic95 now known as Helena_Noel

View profile
One of my favourite books and favourite authors. Very good review. Oh and yes yes yes! I watched the movie and it was really one of those rare ones that live up to your expectations. So amazing. And so lively and sarcastic and funny and oh I'm running out of adjectives :P
Mckay ELITE said...
on Apr. 23 2013 at 1:21 pm
Mckay ELITE, Somewhere, Virginia
146 articles 0 photos 2230 comments

View profile
Thank you. Yes, this novel is hilarious; yet no one seems to think so. I guess we're both just sophiticated reader *British pompous laugh*. And have you seen any of the film adaptions? You should if you haven't. I saw the 2005 film. Really good. Keira is what I envisioned Liz Bennet to be in real life: pretty, smart, and capable of standing up for herself.
Jade.I.Am ELITE said...
on Apr. 19 2013 at 7:17 pm
Jade.I.Am ELITE, Fishers, Indiana
214 articles 14 photos 1159 comments

View profile
:) :) one of my fav's. i think you did a fantabulous job of capturing the essence of this book. it really peevs me off when people don't understand the comedy in it! this book is hilarious!! :P