A Discovery of Witches by Deborah Harkness | Teen Ink

A Discovery of Witches by Deborah Harkness

If "Twilight" had an actual plotline, been well-written, and featured a love interest who didn’t exhibit classic signs of abusive behavior, the result would have been "A Discovery of Witches" by Deborah Harkness. The first book in what has the potential to be a very exciting trilogy, Witches takes supernatural interrelations to a new and interesting level. While the book doesn’t have much original characterization – many of the characters are reminiscent of those in "Twilight" in an obvious, annoying way – the protagonist, Diana, does differ greatly from Bella in that she has a personality and interests outside of her new beau.

The plotline also offers much to readers who want subplots and substance; the literary trend nowadays is to make the love story the main “plotline” and forget about additional action or problems. Harkness deviates from this pathway and creates realistic situations for her characters, leaving the romance simmering in the background where it belongs. Diana Bishop is the last in a long line of Bishops, all of whom can trace their ancestry – and magic – to the Salem Witch Trials. Diana ignores her gift of witchcraft, though, and pursues a life of intellectual achievement as a professor of alchemical history at Yale. When her studies take her to Oxford, she unintentionally calls forth a lost book bound by magic, sending it back to the stacks after realizing it doesn’t contain anything useful to her research. The book’s sudden reappearance wreaks havoc on the magical community, and creatures flock to her in an attempt to force her to recall it. One such creature is the vampire geneticist Matthew Clairmont, who pushes himself into her life on the pretense of protecting the ancient folio – Ashmole 782 – and finds himself stuck there after becoming entranced by the witch who refuses acknowledge her heritage. As more creatures invade Diana’s space with threats and danger, Matthew decides to intervene, whisking Diana away to relative safety until they solve the mystery that is Ashmole 782. Diana soon finds there’s more to her vampire friend than meets the eye, just as there’s more to herself than she had ever realized.

I started off frustrated with this book because I thought it would just be another vampire bandwagon book following Meyer’s messy missteps. Harkness takes those rudimentary elements, though, and expands upon them in her own way. Because "A Discovery of Witches" is her first book, however, some pieces are a bit amateur: the characterization, as I mentioned, and parts of the dialogue specifically – some of the arguments and animosity characters have seem to come from nowhere, even after rereading the passages beforehand. But the subplots and high-interest storyline override those blights for the most part, and the end result definitely leaves readers wanting more. The book veers from the "Twilight" path as it develops, and I find myself eagerly anticipating the next book in the series. The second book "Shadow of Night" came out last summer, and the third and final book is still in development.

I would recommend this book to college-aged girls, though older high school students sick of typical high school stories would also enjoy it. "Witches" could also be used as a stepping stone to introduce Twi-hards to books with a bit more literary merit. It’s a long read, but it’s definitely worth the time. 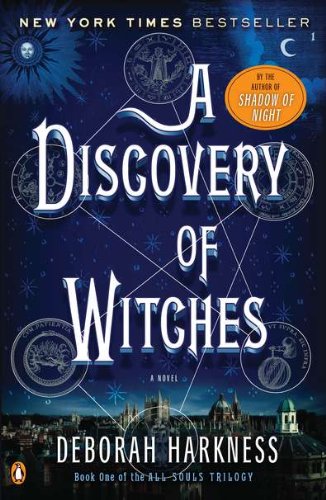 
Buy from Amazon
The author's comments:
I write book reviews as I read them. I stumbled across this book in the library and ended up really liking it.
Post a comment
Submit your own