Humiliated and misunderstood for 200 years, our most elusive Founding Father is finally vindicated. In this sweeping biography, Ron Chernow breathes life into the man on the $10 bill, whose untimely death left his reputation subject to the political elements. Almost fairy-tale-like, it is the story of an illegitimate orphan in the West Indies, born to a failed merchant and a pariah.

Young Hamilton is shunned by society, and battles racism, poverty, and oppression. By a quixotic chain of events, a storm slams into the island of Nevis, and Hamilton finds himself on a boat to New York City, where he is thrust into the Revolution as Washington's right-hand man.

As the first Secretary of the Treasury, his meteoric rise often proved to be a painful one. With a fiery temper and a no-holds-barred voice, Hamilton at once “galvanized, inspired, and scandalized.” His treatises on government and finance were brilliant; his feuds with Thomas Jefferson and other founders were legendary. Hamilton's legacy would forever reshape politics and the new American nation. The rest is history.

While this may sound like any other dusty tome, Hamilton is remarkable for its energy and ambition. Through exhaustive research and the discovery of a new essay, Chernow not only reviews Hamilton's accomplishments, but explores the human side of this deeply troubled man, who was often
misunderstood and scorned by his peers. We see a character who gave his all to society – from his patriotic ­efforts to his care for New York's homeless orphans – often for nothing in return.

Containing wit, intellect, and curiosity, this story is fast-paced, thoughtful, and powerful, bringing down from the old portraits one of the greatest figures of his generation. After 200 years, justice has been delivered to Alexander Hamilton. 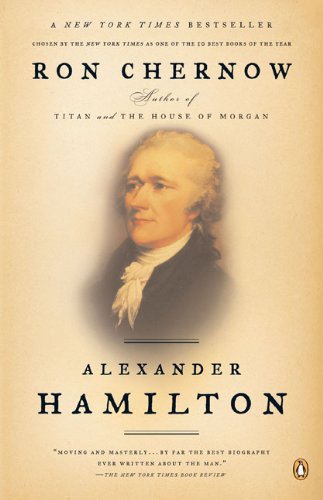