David Copperfield, eighth novel of Charles Dickens was his masterpiece. After having my enjoyable experience with Dickens novel 'The tale of two cities' I thought of reading one more book of Dickens. The topic 'David Copperfield' caught my attention as I was roaming in the library.

The story traces the life history of David from his childhood to his wedding. David's father died months earlier before he was born. As a young child David spends his life with his dear mother and servant Peggotty. David mother later falls in love with a man named Murdstone and married him. Both Murdstone and his sister treated David very badly, and David hate them. After making David's mother trust that David was a wicked boy, Murdstone send David to a boarding school in London.

Just when David manage to well settle in school, he got a message that his mother is dead. He felt that he is left alone in the world. His step father sends David to work in ware house. David, as a young boy dream to grow as a respectful and educated man. He ran away from the ware house, and with a help of his old servant Peggotty he manages to find his aunt Betsey Trotwood home where he educated and lived peacefully. After many struggles in his life including David's first wife Dora's death, David married his old friend named Agnes, whom he used to play while at school.

Charles Dickens wrote the whole book sentimentality, and preaches, and with little humor. My favorite part of the book was when David expressing his feeling when he heard the news of his mother's death. He expressed his feeling as

'I thought of my father's grave in the churchyard, by our house, and of my mother lying there beneath the tree I knew so well. I stood upon a chair when I was left alone, and looked into the glass to see how red my eyes were, and how sorrowful my face. I considered, after some hours were gone, if my tears were really hard to flow now, as they seemed to be, what,in connection with my loss, it would affect me most to think of when I drew near home - for I was going home to the funeral'.

Though this novel is a bulky one, the story is very simple one. It tells us the difference of leading life as a simple boy in Dickens world to our 21st century world. 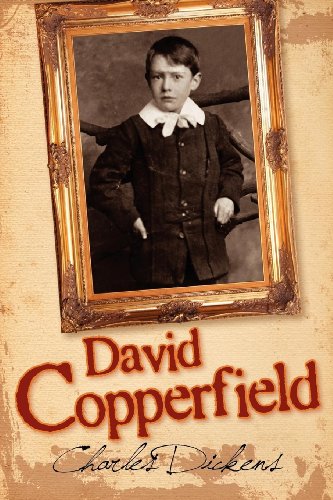