The Magic Toysoph (1967) by Angela Carter

I have to admit, I approached Angela Carter’s ‘The Magic Toyshop’ with some trepidation; the opening paragraph describing the protagonist, named Melanie ‘clambering her own mountain ranges’ and ‘penetrating the moist richness of her secret valleys’ didn’t exactly make me feel a longing need to continue reading.

However, as I ventured a few pages further, I began to thoroughly enjoy myself. The main reason for this is Carter’s sumptuous writing, filled with rich imagery to provoke and tantalise the imagination. Her mixture of the mundane with the fairytale also gives an interesting slant on the typical coming-of-age tale.

The tale follows Melanie as she grows more aware of herself, those around her, and furthermore, her sexuality. The story begins with her and her two siblings living comfortably in rural England, when following an abrupt tragedy, they are forced from their pampered lives and comfortable surroundings to their tyrannical Uncle Philip’s house, with mute Aunt Margaret, rebellious Finn, and Francie, Margaret’s younger brothers.

One would believe that this book is merely about the ‘toyshop’ featured in the title, but is instead about Melanie maturing and growing into a woman. Although, in a way, the title is ironic, as it gives implications of joy and happiness, what with the ‘toys’, but throughout the book, many of the characters must suffer a never-ending plight.

The reader almost immediately feels sympathy for timid Margaret, who is forever at the mercy of her brutish husband, and how she takes care of Melanie’s younger sister, Victoria as her own child. But her helpless character reflects the hopeless environment in which all of them live. One of the few aspects that provides the reader a glimmer of hope is Finn and Melanie’s unlikely romance. This is a subject I found especially intriguing as we see Melanie’s personal conflicts of her disgust with Finn for his poor personal hygiene and ‘common’ disposition, coupled with her indescribable attraction to him.

What I particularly enjoyed about the novel was the fact that I could relate to Melanie, being a teenage girl myself, and the tribulations and frustrations she often finds with teenage life. Unfortunately, the excellent writing is let down by a poor ending, which is preceded by an almost random revelation that has almost no link to the rest of the plot whatsoever. In addition, the ending is just depressing, and I was sadly left unfulfilled by it.

‘The Magic Toyshop’ is one of the most beautifully written novels I have ever read, with a heroine any girl can easily relate to, and an interesting premise of actually being set in an almost sinister toyshop. But the ending hangs over this otherwise excellent book like a dingy black cloud. 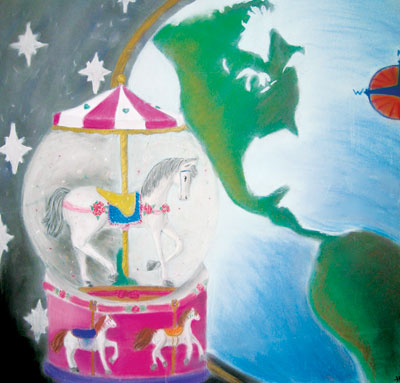 The author's comments:
I just enjoyed this book really, don't let the ending put you off though!
Post a comment
Submit your own