Do you realize the Earth’s value to humanity? Its gives us natural resources, food, water, and life; we couldn’t even breathe without the earth. And your decisions affect everything and everyone around you. The importance of the Earth is greater then you could ever imagine, and I could say hundreds of reasons why but I’ll just say some of the more vital ones. Like what good you do onto the Earth you will receive back; and so, mistreating the Earth results in bad fortune and consequences.
The book, "The Good Earth" was written by Pearl S. Buck and is about Wang Lung’s daily struggles to survive. The title fits perfectly to the book because it’s about the life and labors of a Chinese farmer and the Earths goods and plentiful harvests it can bring. In the book, Wang Lung’s father had built a small temple and put two Earth Gods in it. Wang Lung carries on the tradition of replacing the red paper clothes on the dolls and placing accents in the temple, in hope that it will bring good harvest that year. If you respect the Earth (and Gods in Wang Lungs situation) for what it has given to you, and you give back, you will have good luck. Or disrespect the Earth only to receive nothing in return, and get blamed for storms or droughts.
This story was written when times were harder, in the early 1900’s, and living in 2010, it was a very different read then some of the other books I’ve read. There’s been such a big change, and we rely so heavily on machines that I don’t think we could survive if they were taken away from us. Wang Lung didn’t have tractors to till his land, he had to loosen the dirt and plant every seed by hand. And he relied so heavily on the Earth that he had to wait for rain to water his crops. And without the Earth he couldn’t survive, and neither could we.
In "The Good Earth" Wang Lung had good times and bad times. Times when famine and drought were present, and times when he was happy and rich with many good harvests. Both of which he had no control over. He and his wife O-lan had to pull themselves out of poverty and still keep faith in the great of the Earth. Wang Lung even had a time when he was rich enough to buy more land, land that was more fertile and would no doubt make him even richer. But a severe drought followed and everyone from his town came to him in search of his stored food; and they took almost every one of his hard earned crops. They had no choice but to move south in search of happier times, only to find they would have to become beggars for a living, and this brought little improvement. He, his father, his wife, and his three children live in a small shack, but at least there is food. Badly wanting to leave, Wang Lung waits and finally a war breaks out and the wealthy families leave the city. They steal from the rich and doing so allows them to return home and rebuild their farm. When they return, fortune improves and then it falls again when his father and his wife both die. And when his sons show no interest in carrying on the farm after Wang Lung’s death, he sees that all his work will soon disappear.
I know times have changed and we might not think we use the Earth as much but without it you would see that you should be grateful. Now you know what the Earth gives to you and what consequences might come if the Earth was taken away. What will you choose, the bad Earth, or the good Earth? 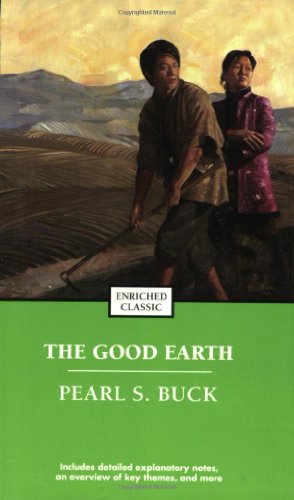 
Buy from Amazon
The author's comments:
I did this for a book project, and its about the relevence of the title to the actual story. Hope you enjoy it.
Post a comment
Submit your own

View profile
I liked how you connected it to modern environmental concerns. :)