A Separate Peace by John Knowles

Anger makes you smaller, while forgiveness forces you to grow beyond what you were. ~Cherie Carter-Scott


The theme of forgiveness in A Separate Peace is a main part in the story because of three key turning points in the story: Gene forgiving Finny, Finny forgiving Gene, and Gene forgiving himself. In the story, Gene is convinced for a while that Finny is trying to sabotage his study efforts. However, at the tree, Gene realizes that the accusations in his mind were false, and he forgives Finny. “Now I knew that there never was and never could have been any rivalry between us,” (59) is a quote that implements this idea. Secondly, after Finny learns the truth about the tree incident, he realizes that Gene did not intentionally make the tree limb shake; it was a “blind impulse,” that Gene had. Finny forgives Gene and expels his awful ideas that Gene did it deliberately. This quote emphasizes the point, “‘It was just some blind impulse you had…it’s okay because I understand and I believe you,” (191). Perhaps Gene’s forgiveness of himself is the most important exculpation in the book. He rids himself of the guilt of Finny’s accident, and he can finally forgive himself. To demonstrate this point is the quote, “Phineas had absorbed it and taken it with him, and I was rid of it forever,” (203). In conclusion, forgiveness is a vital component in John Knowles’ A Separate Peace by the role it plays in several main events. 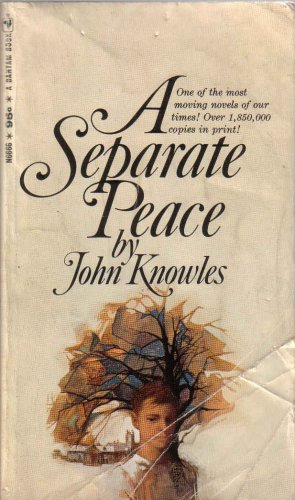 
Buy from Amazon
The author's comments:
Written for my eighth grade English class. Not quite a review, but it didn't fit anywhere else.
Post a comment
Submit your own