A Long Way Gone is a one of a kind memoir. Written by Ishmael Beah, the memoir gives an inside look on what it’s like to be a child soldier in a war torn country. He talks about running away from the civil war, then being forced to join the army, and finally going to a rehabilitation center to become human again. The way Beah writes about his experiences is so descriptive that he hooks you to the book and you just want to keep reading more and more. It is a superb piece of writing that gives you an entire new look at the horrible things war brings to people.
The memoir takes place in the small African country of Sierra Leone. Ishmael Beah was a normal 12 year old kid when his brother and him decided to take a trip to the city if Mattru Jong to perform at a talent show. When they got to the city, Ishmael and his friends were told that the rebels had attacked the villages were the boys had come from. They tried to go back but they quickly realized that it would be almost impossible. In their trips, they were captured a few times but each time something spared their lives. One day a village was attacked, and Ishmael was separated from his brother and friends. He escaped with only one friend and eventually they found another group of boys. Day after day they moved through the jungle until they reached a village which they thought would be like a safe haven. The village was full of soldiers that provided protection but one day the soldiers started to go out and gunshots were heard in the distance. Each day soldiers went out into the jungle with many not coming back; some of those who came back were wounded and others barely made it back. The boys started to get worries because the general of the soldiers called everyone to the center of town. He then told every able boy or man that they could either join the army and fight or they could leave the village and face the dangers of the jungle.
Ishmael then starts to train for the war and becomes addicted to drugs. In their first battle, two of Ishmael’s friends are killed and he starts to fight for revenge. Battle after battle Ishmael fights and kills people with revenge and drugs keep him going. Then he is picked out by some city soldiers and taken to a rehabilitation center. He gets over everything that happened and goes to live with his uncle. Unfortunately, the war reaches the city and Ishmael decides to escape the country. He goes through many posts and he finally makes it to the Sierra Leonean Embassy.
I thought this book was completely amazing! The way it is written is so descriptive that you feel as if you were watching Ishmael go through the jungle. I really recommend it because it shows the things people have to go through in wars and the horrible things they can do to other human beings. I would also recommend it so people can help stop people from using children as soldiers. It is very informative because you learn about the way life is in other countries and why they fight. I absolutely recommend this book to anyone because it a book that will give you a look at the life of a young boy fighting and killing people to save his own life. 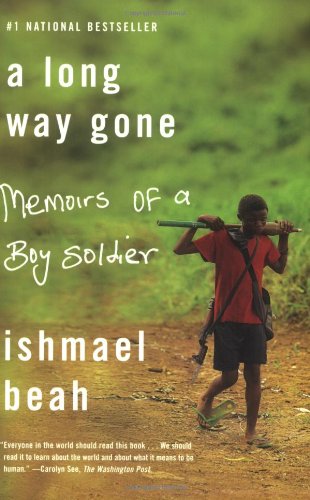